On the other hand, 11 more patients succumbed to the virus, increasing the toll to 6,910 in the State.

VIJAYAWADA: For the third consecutive day, eight districts in the State reported less than 100 new cases, confining the Covid-19 count in the last 24 hours ending Thursday 9 am to a little over 1,300. The Covid-19 tally in the State crossed the 8.58 lakh-mark, but with recoveries on the higher side, the number of active cases is just 16,000. 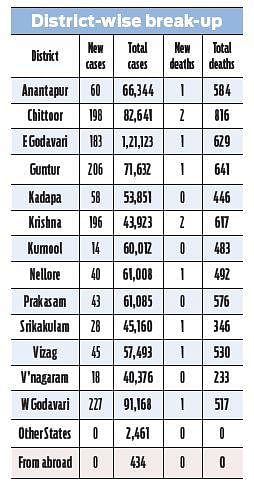 According to the media bulletin issued by the State Command Control Room, more than 75,000 samples were tested in the last 24 hours and of which 1,316 tested positive for the virus.  West Godavari reported the highest number of 227 cases, followed by Guntur with 206. All other districts recorded less than 200 cases and of them, the lowest daily count of 14 was reported in Kurnool.

East Godavari, West Godavari, Guntur, Krishna and Chittoor accounted for more than 1,000 cases of the total 1,316. The total number of cases in Kurnool crossed the 60,000-mark, while the overall count in West Godavari surpassed 91,000. Nellore’s corona tally went past 61,000. Meanwhile, 1,821 patients recovered from the virus and got discharged from hospitals, taking the total recoveries past the 8.35 lakh-mark. Of the 16,000 active cases, East Godavari, Krishna and Guntur accounted for more than half of the total. Vizianagaram and Kurnool have the lowest number of 221 active cases each.

On the other hand, 11 more patients succumbed to the virus, increasing the toll to 6,910 in the State. While Chittoor  and Krishna reported two deaths each, one each was recorded in Anantapur, East Godavari, Guntur, Nellore, Srikakulam, Visakhapatnam and West Godavari. No new fatalities were reported in four districts. Chittoor topped the list in the State with a Covid toll of 816, while the lowest number of 233 deaths was reported in Vizianagaram.

Vizag records 45 fresh coronavirus cases
Visakhapatnam: The district breached the 58,000-mark in Covid-19 tally on Thursday. A mere 45 fresh cases were reported and one person died due to coronavirus. The Covid count reached 58,005 and the toll stood at 499, according to a media bulletin. About 65 Covid-19 patients were discharged from hospitals in the last  24 hours. As on Thursday, the number of active cases and recoveries stood at 1,284 and 56,222 in the district. All six very active clusters were denotified. Out of the total 329 clusters in the district, 11 are active clusters. As many as 318 clusters were identified as dormant. It may be mentioned that the district administration has already denotified 627 clusters.

Now we are on Telegram too. Follow us for updates
TAGS
Andhra Pradesh COVID 19