The executive officer said construction workers found the coins and rings in a brass box.

It was unearthed while the temple authorities were renovating the old Matam premises. Last month, 32 copper inscriptions, 264 silver coins and one copper coin were unearthed in the same location. An old dhyana mandiram was also excavated from the spot. 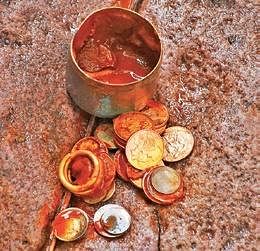 Temple executive officer KS Rama Rao told TNIE that the coins unearthed on Sunday were identified as being used between 1880 and 1913 during the British regime. This was concluded based on the date minted on the coins. Photos of the coins and other artefacts were sent to the Department of Archaeology for verification, as per the regular procedure.

The executive officer said construction workers found the coins and rings in a brass box. After an inquest in the presence of endowments, revenue and police officials, they were placed in the temple’s strong room (treasury). The developments were communicated to higher officials of the government, he added.

The temple authorities are planning to establish a museum in their premises to exhibit the unearthed ancient treasure. They have identified a building to temporarily house the proposed museum till a permanent structure is constructed.

“Since the treasures, be it gold, silver, copper coins or other artifacts, were found on the temple premises, they belong to the presiding deities - Goddess Bhramaramba and Lord Mallikarjuna. They will not be handed over to the archeology department,” the executive officer said.He added that they have already sent a proposal to set up a museum to the State government, explaining the circumstances in detail, and are now awaiting the government’s approval.

According to him, on May 10, 2017, a treasure trove consisting of three golden bangles (bangaru kadiyalu) weighing more than half a kg, 18 gold coins, 147 silver coins, some small silver vessels, one kunkum bharanam and a small basin was unearthed at Ghanta Matam during the renovation work.

Now we are on Telegram too. Follow us for updates
TAGS
Andhra Pradesh treasure Srisailam treasure