VIJAYAWADA: Chief Minister YS Jagan Mohan Reddy has directed the Health Department to appoint Arogya Mitras in all Aarogyasri network hospitals and grade the hospitals based on the medical services and facilities. The entire process should be completed in two weeks, he said.

Addressing a high-level review meeting on Aarogyasri Hospitals and Covid-19 situation in the State on Friday, the Chief Minister emphasised the need for offering quality medical services in Aarogyasri hospitals and directed the officials to install CCTV cameras in all the hospitals. He also instructed them to take follow-up action based on the IVRS feedback obtained from patients regarding the quality of medical services and sanitation in the hospitals. 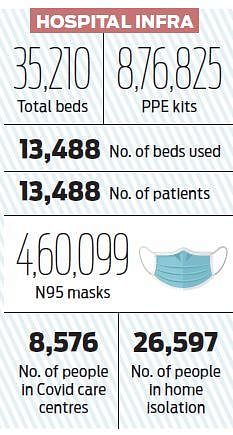 Reiterating that six mandatory things should be followed by all the hospitals, which include medical facilities, availability of doctors and medicines, provision of nutritious diet, sanitised atmosphere and Arogya Mitra help desk in all the empanelled hospitals, he said stern action would be taken against the hospitals which failed to follow the stipulated guidelines.

The Chief Minister said the Arogya Mitra help desks are meant to monitor the services provided in hospitals on a regular basis. Further, Arogya Mitras should receive the patients and guide them to the doctor concerned. If the hospital does not offer any treatment, they should send the patient to the nearest hospital, by following the protocol strictly, he said.

Jagan instructed the officials to be more vigilant and ensure that people make the best use of 104 call centres by promoting awareness among them in this regard. The officials were asked to ensure that the helpline works without any interruption. With regard to home quarantine, he said home isolation kits should be given to every patient and ANMs should be in touch with the patients.

The officials informed that Covid spread is on the decline in the State. The daily count of Covid cases, the positivity rate and the mortality rate had declined considerably. The Covid testing capacity of the State has been increased significantly. As many as 35,680 RT PCR tests and 8,890 TrueNat tests are being conducted a day, which is the highest in the country. As many as 63,49,953 tests have been conducted in the State so far. The recovery rate is 92.59 per cent, while the mortality rate is 0.83 per cent.

The officials also informed the Chief Minister that a total of 38,042 beds were made available in 252 hospitals across the State and nearly 5,000 ventilators are in place. The number of oxygen beds in the hospitals increased to 28,790 from 3,636. Plasma therapy is also being offered to Covid patients, they said.

Now we are on Telegram too. Follow us for updates
TAGS
Jagan Mohan Reddy Arogya Mitras network hospitals