VIJAYAWADA: The Free Crop Insurance scheme has come as a big boon to the farmers in Andhra Pradesh, as almost all the notified crops in the State will now be covered under it. As the farmers have to pay just Rs 1 to get enrolled in the scheme, a large number of farmers are availing the opportunity.

Number of farmers enrolled for crop insurance increased by 154 per cent in 2019 after Chief Minister YS Jagan Mohan Reddy announced the free crop insurance scheme on July 8, celebrated as the YSR Rythu Dinotsavam.

The number of farmers enrolled went up from 16.69 lakh in 2018 to 25.73 lakh in 2019 and the number is expected to increase further in the present Kharif, with the Stat government issuing notification for free crop insurance mentioning the type of crops covered under the scheme.

The objective, officials said, was to cover almost all the farmers in the State cultivating the notified crops and ensure that in case of crop loss, the claims are settled without any delay, so that the farmers can invest in the next crop.

State share of the insurance scheme went up by 496 per cent, as it paid Rs 1,455.34 crore, compared to Rs 296.46 crore in the 2018 Kharif. Last week, the State government notified the list of crops, areas under yield-based and weather-based schemes for Kharif 2020 along with other operational modalities.

The notification clearly states that the claims under Yield based Crop Insurance scheme will be settled on the basis of yield data furnished by State government based on requisite number of Crop Cutting Experiments (CCEs) conducted under General Crop Estimation Survey (GCES) and not on any other basis. Further, the claims under Weather Based Crop Insurance Scheme shall be settled on the basis of the weather data furnished by the government  and not based on individual declaration.

Before the launch of the free crop insurance scheme, under PM Fasal Bima Yojana, farmers, State government and Centre had to pay their share and any delay on anyone’s part would result in the loss of the insurance cover.

Once the notification is issued, the government used to call for tenders from insurance companies and those who bagged the contract used to collect premiums from farmers and settle the claims.  However, after Chief Minister Jagan announced the free crop insurance scheme, the government decided to do away with the insurance companies and decided to float Andhra Pradesh General Insurance Corporation Limited (APGICL), a 100 per cent State-owned entity primarily for taking care of insurance needs of the farmers.  Meanwhile, the settlement of insurance claims for Kharif and Rabi 2019-20 were taken up by the government itself.

“The new scheme was beneficial to the farm sector as all the farmers cultivating the notified crops will have crop insurance coverage. As the new system did not fit the norms of the PM Fasal Bima Yojana, the Centre refused to pay its share for the last Kharif and Rabi seasons. As the government itself is paying the premium, the burden is not much. However, once the APGICL is formed, which is expected to be in the next couple of months, the Centre will give its share for insurance like before,” Special Commissioner for Agriculture Arun Kumar told TNIE.

E-crop has been mandatory for two reasons — to get an accurate and authenticate data so as to avoid instances of one type of crop insured while a different crop cultivated like in the past; and to have an authenticate records of the crops cultivated and the extent it was cultivated, for easy and earlier settlement of claims in case of crop damage.

“Free Insurance Scheme augurs well for the farmers. They will feel less burdened and at the same time assured of insurance coverage, so they can cover the losses in case of any natural calamities and go for next crops without delay,” opined G Chandra, a farmer in Kadapa.

However, he wanted the government to be more transparent in settlement of claims, that too at the earliest. K Srinivas Rao, another farmer from Parachur in Prakasam district, echoed the opinion and felt that it gives the much-needed confidence to the farmers for taking up the crop, as they would be able cover the losses to some extent in case of any eventuality. 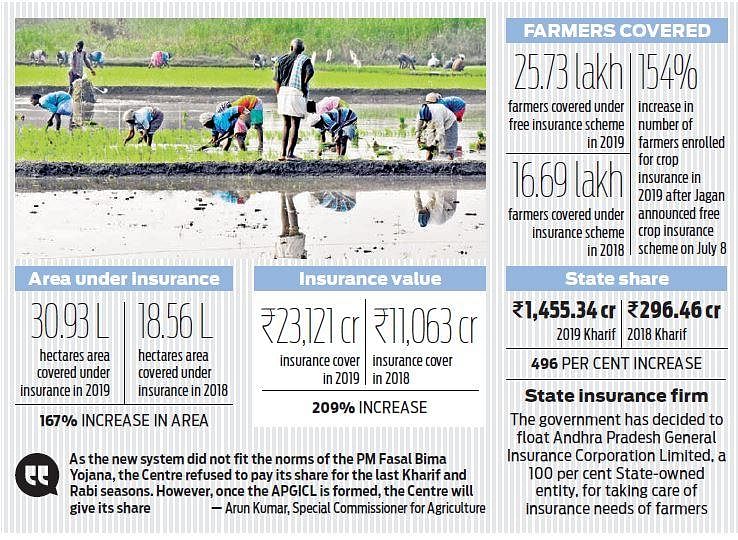 Now we are on Telegram too. Follow us for updates
TAGS
Free Crop Insurance scheme Crop insurance Andhra Pradesh