According to the latest media bulletin released by the State Command Control Room, 69,463 samples were tested in the 24 hours ending Wednesday 9 am.

VIJAYAWADA: Showing a further decline, 3,892 fresh coronavirus cases were reported in Andhra Pradesh on Wednesday as the aggregate went up to 7,67,465. Twenty-eight fresh Covid-19 deaths were reported as the toll rose to 6,319. With the steady increase in recoveries, active cases stand at a little over 41,000. 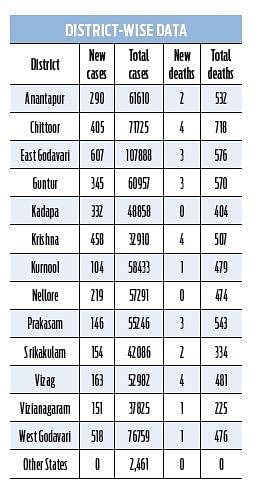 According to the latest media bulletin released by the State Command Control Room, 69,463 samples were tested in the 24 hours ending Wednesday 9 am. While the daily spike in East Godavari and West Godavari was 607 and 518, respectively, the remaining 11 districts saw a surge of less than 500 new infections. Including Kurnool, which reported only 104 positives, five districts recorded less than 200 cases in the 24-hour period.While, East Godavari has the highest caseload (1.07 lakh), Krishna has the lowest (32,910).

Meanwhile, the steady increase in the number of people getting cured  has brought down the active cases to 41,669. On Wednesday, recoveries stood at 5,050. Kurnool district has the lowest active cases (1,322), while East Godavari has the highest (over 7,000). Out of the another 28 patients who succumbed to the virus, four each were from Chittoor, Krishna and Visakhapatnam; three each from East Godavari, Guntur and Prakasam; two each from Anantapur and Srikakulam; and one each from Kurnool, Vizianagaram and West Godavari districts.

Now we are on Telegram too. Follow us for updates
TAGS
Andhra Pradesh covid cases coronavirus COVID 19 Andhra coivd cases