Undavalli writes to CJI for live telecast of cases against politicians

RAJAMAHENDRAVARAM: Former MP Undavalli Arun Kumar has sent a letter to Chief Justice of India SA Bobde seeking live telecast of court proceedings in cases involving prominent politicians in the State so that people can know the facts.

Addressing a press conference here Saturday, Arun Kumar opined live telecast of proceedings is necessary in view of the fact that the media is completely polarised in the State. “Cases are pending against important politicians of the State -- one who ruled the State for 15 years (former CM Naidu) and another who won with a massive mandate (Chief Minister YS Jagan Mohan Reddy) -- involving charges of corruption. Such cases should be telecast live. I urged the CJI for the same through my mail forwarded four days back,’’ he revealed.

Replying to queries on the Chief Minister’s letter to the CJI against Supreme Court Judge Justice NV Ramana and a few Justices of the High Court, he favoured a nationwide ‘healthy debate.’ The former MP pointed out that Jagan’s letter is not the first by a CM to the CJI against the High Court of a State. “In the 1960s, Chief Minister Damodaram Sanjivayya wrote a letter to the then Home Minister Lal Bahadur Shastri against the then High Court Chief Justice Chandra Reddy. 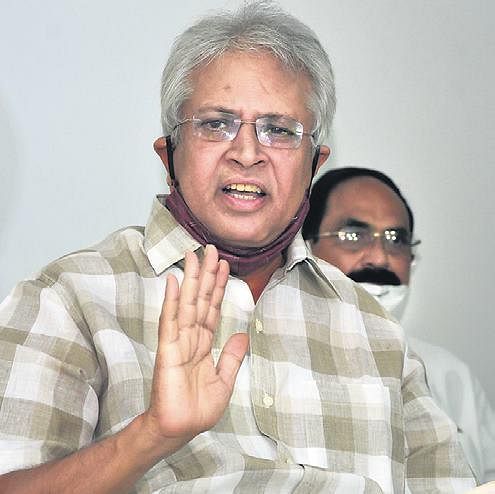 However, he felt that Jagan might have handled the issue much better using the proper channels instead of placing his letter in public domain. “Jagan may have his reasons ... politics is like a game of chess but the King must play by the rules,’’ he said. Arun Kumar found fault with the High Court’s gag order on media in the former advocate general Dammalapati Srinivas case. “What is wrong in a former AG purchasing land? Why should there be any gag order?’’ he questioned.

He also opined that purchasing lands by either judge’s daughters or advocate general was not wrong. “How can one prove insider trading? There is speculation (about location of capital city) and they have purchased the lands. Now that the capital is being moved from there, what will happen to their lands?’’ he questioned. He wondered how could the High Court summon the DGP and ask him to read out Section 151 of the CrPC in a case related to the arrest of Chandrababu Naidu in Vizag. “What message does it send to the people? If it was done to send a message that it is more powerful than the State government, it is surprising. Judges are only representatives of justice and they have to render justice. It is the government which has to implement it again,’’ he said.

Now we are on Telegram too. Follow us for updates
TAGS
Undavalli Arun Kumar CJI