The PPA has scheduled the meeting as the Union Ministry of Jal Shakti (MoJS) asked the PPA to confirm the price level to be considered for the RCE of the project.

VIJAYAWADA: All eyes are on the Polavaram Project Authority (PPA), which has scheduled a meeting on November 2 to discuss and take a call on the issue of revised cost estimates (RCE) of the Polavaram Irrigation Project (PIP) after the Union Finance Ministry sought a confirmation on the price level — 2013-14 or 2017-18 — to be considered for finalising the national project’s cost.

While it remains to be seen what resolution the authority passes, it looks imminent that the issue needs Union Cabinet’s intervention, ergo the Prime Minister’s, to resolve the issue.

The PPA has scheduled the meeting as the Union Ministry of Jal Shakti (MoJS) asked the PPA to confirm the price level to be considered for the RCE of the project. While the Central Water Commission (CWC), Polavaram Project Authority and the Revised Cost Committee (RCC) of MoJS, approved the RCE at Rs 47,725.74 crore at 2017-18 price level in addition to the Rs 55,548 crore at 2013-14 PL, the ministry of finance pointed out that the project would get funds as per the 2013-14 PL as per the Union Cabinet memo dated March 15, 2017. 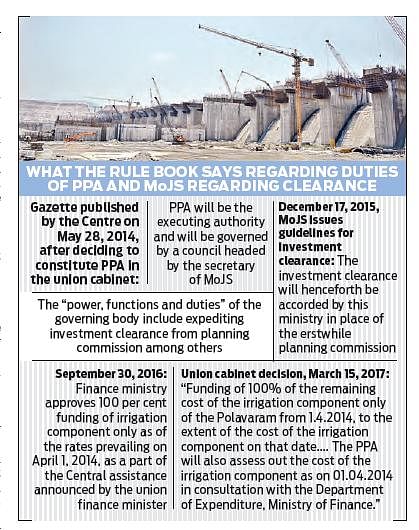 The PPA will consider the matter in its meeting, to be attended by the State officials, next week and take a call. If it resolves to back its decision of recommending 2017-18 PL costs, it would be forwarded to the MoJS, which would take up with the Finance Ministry. Even if the MoJS stands its ground and clears the costs at 2017-18 PL, it looks imminent that the RCE needs the union cabinet’s intervention.

For the record, following the bifurcation, the Union cabinet in May 2014 approved the constitution of the PPA. As per the gazette published by the Centre dated May 28, 2014, the investment clearance for the cost would be done by the planning commission. Since the planning commission was replaced by Niti Aayog, the MoJS, on December 17, 2015, stated that the ministry itself would accord the investment clearance. Subsequently, on September 30, 2016, the department of expenditure had sent a memo stating that funding would be done for the 100 per cent remaining cost of the irrigation component as per the costs as on April 1, 2014. The same was also ratified by the Union Cabinet on March 15, 2017, while it approved a special dispensation for AP as accepted by the then State government.

Since there are two cabinet decisions, and with the latter not mentioning that it would supersede the previous decision, the officials said, that the issue is likely to go to the Union Cabinet. “The PPA will forward its decision to the MoJS, which should get it cleared from the finance ministry. If the finance ministry raises the issue of the 2017 cabinet decision, the MoJS will have to forward it to the Union cabinet for clearance,” a senior official explained.

While it remains to be seen what the PPA would decide, the State officials expect it to confirm the latest rates. “The State government forwarded the RCE at 2017-18 PL only at the behest of the PPA, which repeatedly sought the revised costs. After vetting it thoroughly, the authority forwarded it to CWC and MoJS, which technically and financially appraised the latest rates. Now, if the authority goes back on its own approval, it would be unprecedented,” the official observed.

The process of getting a ‘favourable’ decision is not only going to be long, but may also require the state government to mount pressure as it requires the Union Cabinet intervention, according to a few officials. While State Water Resources Minister P Anil Kumar has already said the Chief Minister YS Jagan Mohan Reddy would write a letter to the Centre, including the PM, it is also learnt that the State officials have begun pursuing the matter with the MoJS in New Delhi.

Now we are on Telegram too. Follow us for updates
TAGS
Polavaram Project PPA Polavaram project authority