The duo were identified as Devarakonda Srinivas Rao and Devarakonda Rajesh from Aswaraopeta in Khammam district of Telangana. 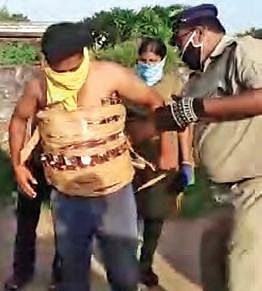 Around 5 am on Tuesday, the Vissannapet excise police conducted checks at Polavaram village in Chatrai mandal near Telangana State border when they found the movement of two persons going on a motorcycle suspicious. “As the duo have strapped 101 non-duty paid liquor (NDPL) bottles (180 ml each) around their upper body with a plaster, they struggled to get down from the vehicle,” Vissannapet excise inspector JS Balaji said.

The duo were identified as Devarakonda Srinivas Rao and Devarakonda Rajesh from Aswaraopeta in Khammam district of Telangana. Sources said the duo, to earn easy money, decided to sell liquor in AP, as the cost of alcohol was high here. The officials seized liquor bottles and the bike. A case was registered.

Now we are on Telegram too. Follow us for updates
TAGS
Bootleggers liquor Telangana Andhra Pradesh