VIJAYAWADA: Covid-19 tally crossed 4.50 lakh after the state recorded over 10,000 cases for the eighth straight day on Wednesday. Active cases, however, stood at a little over 1.03 lakh with another 8,454 patients recovering even as 72 Covid deaths were reported in the 24 hours ending Wednesday 9 am, according to the latest bulletin by the State Command Control Room.

With over 61,000 infections, East Godavari continued to lead the table of overall cases, in which Krishna stood at the bottom. Krishna also has the lowest number of active cases (2,482). 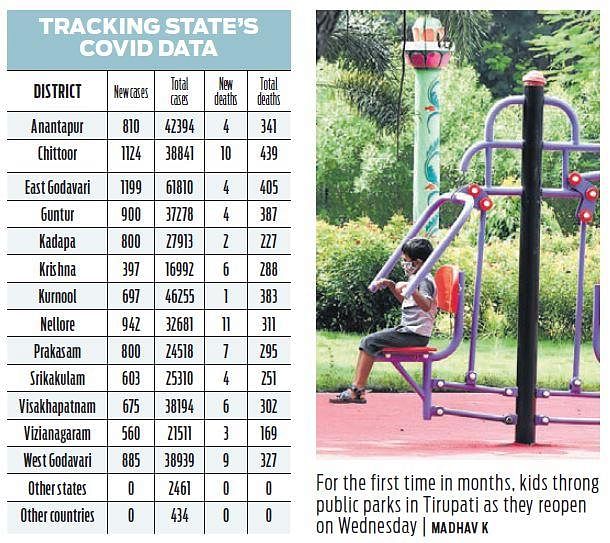 Meanwhile, the cumulative tally in Srikakulam crossed the 25,000 mark; Visakhapatnam, where more than 39,000 people tested positive so far, has the highest number of infections in North Coastal Andhra.

However, 8,454 more getting discharged from hospitals took the total recoveries past the 3.48 lakh-mark. The 72 deaths on Wednesday took the toll to 4,125.

Out of the 72, Nellore accounted for 11 casualties, Chittoor 10, West Godavari nine, Prakasam eight, Krishna and Visakhapatnam six each, Anantapur, East Godavari, Guntur and Srikakulam four each, Vizianagaram three each, Kadapa two and Kurnool one.

Now we are on Telegram too. Follow us for updates
TAGS
Andhra Coronavirus COVID-19 Coronavirus Andhra Pradesh