VIJAYAWADA: After a gap of a few weeks, Andhra Pradesh reported less than 8,000 new Covid-19 infections even as 9,784 patients were discharged from hospitals in the 24 hours ending Monday 9 am.
According to the latest bulletin by the State Command Control Room, while the overall recoveries stood at 4,76,903, the coronavirus tally rose by 7,956 to 5,75,079. With another 60 casualties, the toll reached 4,972 (as on Monday 9 am). The state, which has 93,204 active cases left, has so far tested 46,61,355 samples, including the 61,529 tested between Sunday and Monday morning. As many as 1,412 more people in East Godavari and 1,091 in West Godavari district tested positive. 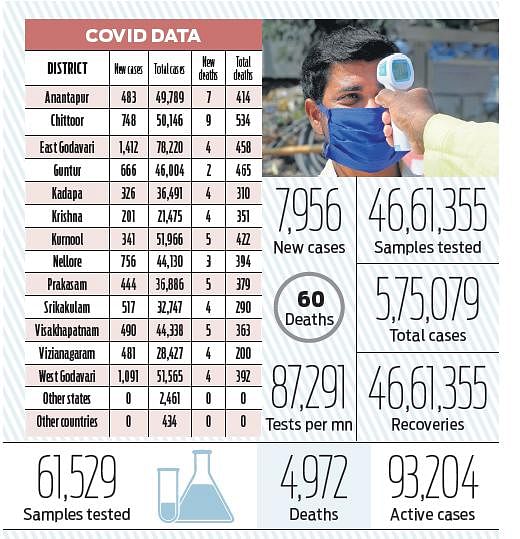 Tourism minister tests +
Minister for Tourism Muttamsetti Srinivasa Rao and his son MV Siva Sai Nandeesh are in home quarantine after they tested positive for the novel coronavirus, an official release said Monday.

Now we are on Telegram too. Follow us for updates
TAGS
COVID-19 Andhra Pradesh