The Centre had offered two options to States to compensate them amid inadequate cess collections under the GST regime.Sources said that the State government has written a letter to the Centre seeking the release of the entire GST compensation amount due to the State keeping in view the financial crisis arising out of the COVID-19 pandemic and others.

“Though Option 1 is also not a complete solution for the State to come out of its present precarious financial situation, it is better than the second option and the State opted for the first one,’’ a senior official told TNIE. Apart from Andhra Pradesh,  11 other States — majority of them NDA-ruled ones — have opted for the Option 1.

The Option 1 given by the Centre allows the States to borrow the tax collection shortfall under the GST, which is estimated at Rs  97,000 crore, through the GST Council. “By choosing the Option 1, Andhra Pradesh can borrow Rs  1,806 crore. When it comes to Option 2, the State will not get that much amount as getting loans under the second option is linked to State’s borrowings so far,’’ the official explained.

Apart from the Rs  1,806 crore that the State will get under borrowings to be facilitated by the GST Council, the State will also get another Rs  2,000 crore as regular GST compensation during this financial year. “The total will come to nearly Rs  4,000 crore,  which is almost equal to the GST compensation due we are supposed to get from the Centre,’’ the source explained.

It may be recalled that Chief Minister YS Jagan Mohan Reddy has recently written a letter to the Centre for the timely release of GST compensation. In the letter, Jagan cited the dwindling financial resources and the welfare schemes taken up by the State government even during the pandemic.

Meanwhile, the State government, apart from the release of GST compensation and funds for Polavaram Irrigation Project, has also sought release of pending Rs  1,728 crore food subsidy to the AP Civil Supplies Corporation to help it clear the pending payments. The State will also seek Rs  581.60 crore dues pending from the Centre with respect to the grant of 14th Finance Commission to Urban Local Bodies (ULBs). 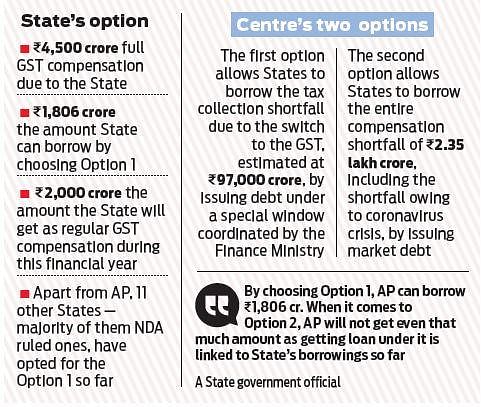 Now we are on Telegram too. Follow us for updates
TAGS
Andhra Pradesh government GST