Total recoveries reach 4.86 lakh as over 9,500 patients were cured between Mon & Tues.

VIJAYAWADA: The coronavirus toll in Andhra Pradesh shot past 5,000 after the death of 69 patients in the 24 hours ending Tuesday 9 am. Prakasam accounted for 10 casualties, followed by nine in Chittoor. The cumulative tally rose by 8,846 to reach 5.83 lakh.

East Godavari was the only district that reported over 1,000 new cases with its overall infections inching closer to the 80,000-mark. Though the number of new cases was below four digits, Prakasam and West Godavari districts continued to record high number of infections with 979 and 955 more people testing positive from the two districts, respectively.

Meanwhile, daily recoveries were on the higher side bringing active cases further down. As many as 9,629 patients were discharged from hospitals across the state pushing the overall recoveries to 4.86 lakh, leaving 92,353 active cases.

In Prakasam, over 13,000 cases are active even as Krishna has the least with 2,889 persons still in treatment either at hospitals or in home isolation.

Meanwhile, East Godavari and Krishna accounted for six deaths each in the 24 hours, followed by five each in Kadapa and Visakhapatnam, four each in Guntur, Nellore, Vizianagaram and West Godavari, and three each in Kurnool and Srikakulam. 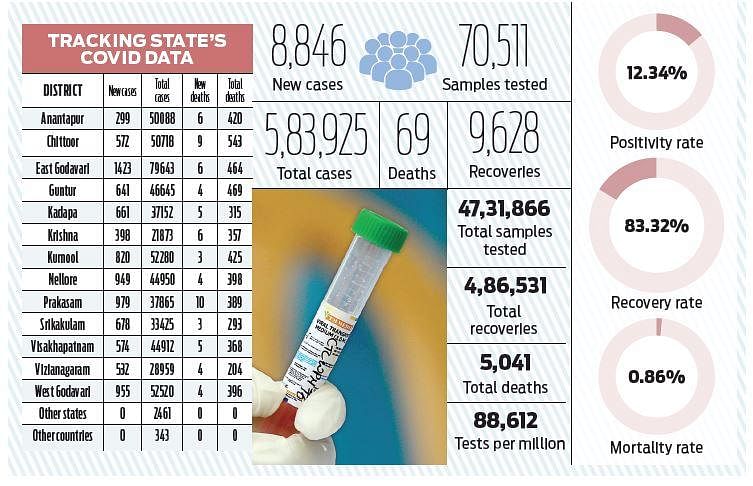 Now we are on Telegram too. Follow us for updates
TAGS
coronavirus Andhra Pradesh