VIJAYAWADA: Terming his recent three-day visit to the national capital fruitful, Industries and Commerce Minister Mekapati Goutham Reddy has said that five Public Sector Undertakings (PSUs), including ITDC, NTPC, SAIL, BHEL, have assured to set up centres of excellence (CoEs) in the State.

He said  Niti Aayog Chief Executive Officer Amitabh Kant was impressed with the ‘Nadu-Nedu’ initiative of the State government. Kant said  he will visit a school and a Primary Health Centre, to be developed under the Nadu-Nadu scheme, during his visit to Vizag in October.

Speaking to mediapersons at the APIIC office in Mangalagiri on Thursday, Goutham Reddy said the Ministry of Ports has assured to provide connectivity and make minor investments in the eight fishing harbours to come up in the State. Union Industries Minister Piyush Goyal has assured to allocate at least two petrochemical projects in the State.

The BHEL, besides setting up a centre of excellence, is planning to establish a solar manufacturing plant in the State once its board clears the proposal, he informed.

“AP, which has more number of drug industries, has the advantage to clinch the Bulk Drug Park,” he said and added that East Godavari will be the location for it.  He said that plans are afoot to develop Vizag as a world hub for cloud computing.

The DPRs for Ramayapatnam, Bhavanapadu ports have been prepared, he said adding that ground breaking ceremony for both the ports and Machilipatnam port will be conducted on December 15. Bids will be called before that. He said that there was a proposal to set up a ship building facility in the State.

“We have spoken to the Apple management and their major subcontractors and enquired about the ecosystem they require. If the company sets up shop at Kopparthy Park in Kadapa district, it can use Kadapa airport for their cargo service. There are chances of the State getting an Apple unit,” he said.
Stating that the previous government should be given the credit for the recent ranking in the start-up ecosystem, the minister, however, said the start-up culture in the State is still in a nascent stage. 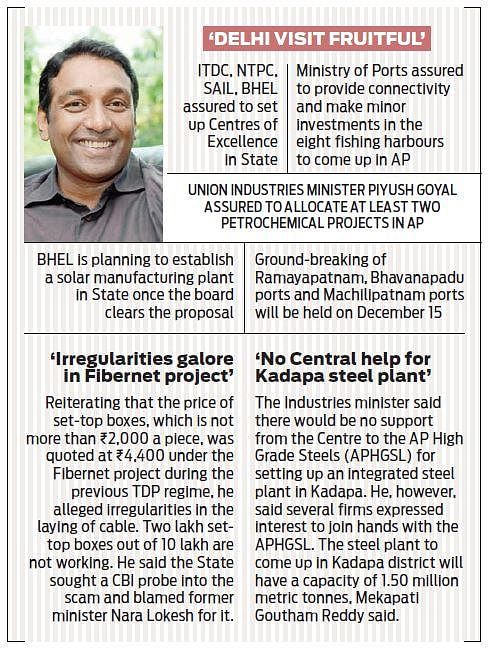 Now we are on Telegram too. Follow us for updates
TAGS
Mekapati Goutham Reddy PSUs Andhra Pradesh Nadu Nadu initiative centres of excellence