VIJAYAWADA: The number of Covid-19 cases reported in a day continued to be below 100 in the last 24 hours ending at 9 am on Friday. About 68 new cases were reported today increasing the tally in Andhra Pradesh to 8,88,760 cases. About 106 patients were discharged from different hospitals in the last 24 hours, taking the total number of recoveries to 8,80,784. 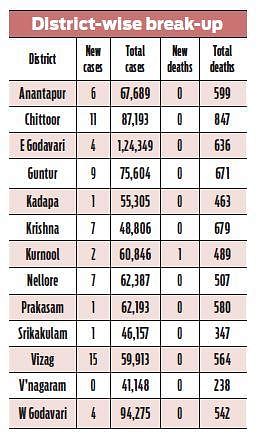 The highest number of Covid-19 cases in the last 24 hours was reported in Visakhapatnam (15 cases), followed by 11 cases in Chittoor district. A total of 10 districts reported less than 10 cases in the last 24 hours, with Vizianagaram district reporting zero cases. East Godavari district with a total 1,24,349 cases continues to top the list of overall cases, followed by West Godavari district with 94,275 cases, Chittoor with 87,193 cases, Guntur with 75,604 cases and Anantapur district with 67,689 cases.

The highest number of active cases are reported from Chittoor district (165), followed by Krishna (133), EG (86) and Kadapa district (78). Chittoor district, with a total 847 deaths leads the table followed by Krishna with 679 deaths, Guntur with 671 deaths, East Godavari with 636 deaths, Anantapur with 599 deaths, Prakasam with 580 deaths, and Vizag with 564 deaths and Vizianagaram  district with the least number of deaths at 238.

Now we are on Telegram too. Follow us for updates
TAGS
East Godavari COVID19 Coronavirus COVID-19 covid deaths