Amul Dairy project to take off in 108 Guntur villages

Project to be launched on March 1 to strengthen dairy sector

GUNTUR: The AP Amul Dairy project will commence its operations in 108 villages of Guntur district from March 1 in the first phase. Of the 108 villages, 66 are in Narsaraopeta division and 42 are in Guntur division. AP Dairy Development Cooperative Federation Limited (APDDCFL) Vice-Chairman and Managing Director Ahmed Babu said the tie-up with the Amul Dairy would go a long way in removing the middlemen system in the dairy sector, besides rewarding the farmers with the remunerative prices. 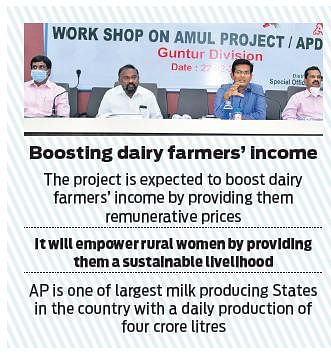 “Milk cooling centres would be set up in villages across the district,” he said, adding that the project would boost women empowerment in a big way.“At present, the project will cover 108 villages in the Guntur district through 85 Rythu Bharosa Kendras (RBKs).

Compared to the private dairies, the Amul Dairy project has come out with a competitive price to the farmers,” he said. Joint Collector Dinesh Kumar directed the officials to set up required machinery at Rythu Bharosa Kendras by February 28. He said that milk cooperative societies would be formed with women.

Now we are on Telegram too. Follow us for updates
TAGS
Amul Dairy project Guntur