ONGOLE:  The Prakasam  police on Monday arrested five more persons from various parts of the State for spreading false news of vandalisation of idols on the arch at the Singarayakonda Lakshmi Narasimha Swamy temple on social media.

SP Siddharth Kaushal said they have registered cases under various sections of the IPC and arrested eight persons on January 5 for spreading false news based on the rumour spread by a local person that the idols of Sri Lakshmi Narasimha Swamy and Goddess Lakshmi on the arch of the temple in Singarayakonda village were vandalised by some unidentified persons. 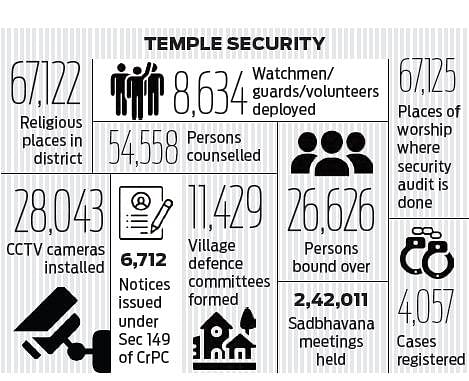 The SP said they have also registered cases under Section 16 of Cable Network Act against those posting false news on social media platforms such as Facebook, WhatsApp and Twitter. In this connection, the police arrested five of the 33 identified persons for spreading false news on social media (24 persons on Facebook, five on Twitter and four on YouTube) from different parts of the State on Monday.

The SP said they formed three teams to nab the remaining accused. He said that security at all places of worship in the district has been strengthened.  The district police, panchayat secretaries, VROs and village women protection secretaries and volunteers are keeping a strict vigil on religious places in the district.
The district police are on high alert and keeping a 24x7 vigil on temples/prayer halls. The department has geo-tagged all major places of worship.

Now we are on Telegram too. Follow us for updates
TAGS
Social media fake news Prakasam police