COVID-19 positivity rate under seven per cent in Andhra Pradesh; no fatality in last 24 hours

Seven districts reported under 10 cases each with the lowest of three emerging from both West Godavari and Srikakulam.

VIJAYAWADA: The state did not report any Covid-19 death in the 24 hours ending Wednesday 9.00 am. With the low number of cases emerging even after more than 40,000 tests were performed on the day, the positivity rate slid down to under seven per cent. 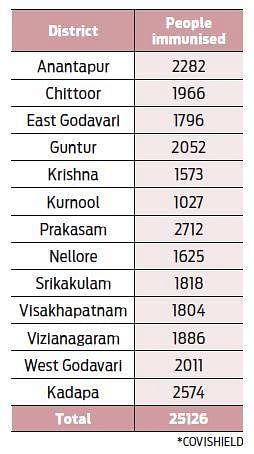 According to the media bulletin released by the State Command Control Room, more than 45,000 samples were tested in the 24 hours out of which 173 returned positive.

Seven districts reported under 10 cases each with the lowest of three emerging from both West Godavari and Srikakulam.

​The highest number of new cases were reported from Chittoor district (46) and Visakhapatnam (27).

In the same period, 196 patients recovered from the virus pushing the overall recoveries to 8,77,639.

Active cases have come down 1,637. Six districts have less than 100 people each still being treated for the coronavirus.

The highest number of cumulative cases is in East Godavari (1.24 lakh) and the lowest of 41,000-odd in Vizianagaram district.

With respect to deaths, Chittoor has the highest number of fatalities (846).