VIJAYAWADA: The State government is likely to move the Supreme Court urging it to declare irrigation/hydel projects over inter-state rivers as national projects and hand over their security to Central forces, besides seeking suspension of a GO issued by the Telangana government last month to generate power at Srisailam.

Official sources confirmed that the government is working on drafting the petition in the wake of the unilateral move by the Telangana government to generate hydel power at Srisailam beyond permissible limits and Telangana Chief Minister K Chandrasekhar Rao’s declaration that the two States should have equal share in Krishna waters contrary to the tribunal award of 66:34 ratio. Similarly, the government is peeved with the Krishna River Water Management Board (KRMB) for turning a blind eye to Telangana’s unauthorised projects and had also accused it of discriminating against Andhra Pradesh. In this context, the government is likely to push for a directive by the Apex Court to the Central government to finalise KRMB’s powers and functions. 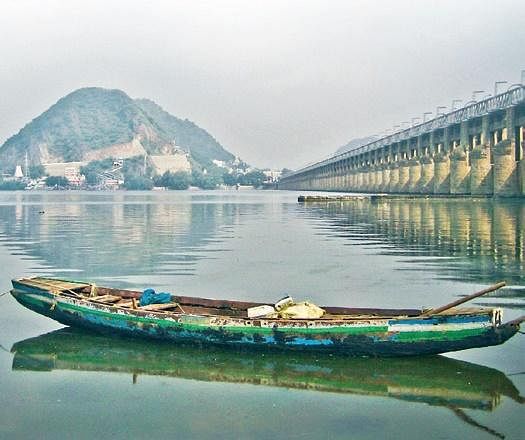 According to sources, the government is likely to argue that river disputes have become common in the country and it is time to recognise reservoirs and hydel projects on inter-state rivers as national in nature since it is necessary to implement orders issued by the various tribunals and courts on water disputes. The government, the sources explained, wants to drive home the point that a permanent solution needs to be found to prevent the construction of unauthorised projects, drawal of water beyond permissible limits, violation of agreements/awards and other illegal acts. Water Resources department officials pointed out that as per the Constitution, it is the Centre that has to resolve river water disputes.

“Therefore, the government may argue for bringing all projects over inter-state river waters under the control of the Central government and hand over their security to Central forces,” they said.
On the ongoing dispute with Telangana, they recalled that under the Bachawat Award, drinking water and irrigation needs take precedence over power generation. Power can be generated only when water is discharged for irrigation purposes and it can’t be the other way round.

The official sources made a valid point that upper riparian States must take into consideration the drinking water and irrigation needs of lower riparian states before going in for power generation.
If power is generated without paying heed to the drinking water and irrigation needs of the lower riparian states, the water discharged goes waste into the sea and it amounts to human rights violation, the government is likely to argue in court.

The sources said one upper riparian state (Telangana) is behaving like no law applies to it and is taking unilateral decisions as per its whims and fancies. Under the circumstances, there is no other option but to move the Supreme Court. “Water and food are fundamental rights of the people... the Telangana government is behaving in such a way as to violate these rights... we have already brought the Telangana government’s whimsical attitude to the notice of the authorities concerned but the former is being deaf to even their directions,” they said, adding that the government will urge the court to direct the Centre to take over the projects and ensure that Andhra gets its rightful share of the waters.