Investigations have revealed that the poachers had brutally chopped the canines of the feline who had died of natural causes.

BENGALURU: Three people were arrested on Thursday for hacking off the canines of Bandipur’s famous tiger Prince, whose carcass was found on April 2 in the Kundakere wildlife range. Meanwhile, investigations by the Forest Department into the causes of the tiger’s death have confirmed that it died of natural causes.

The Forest Department had instituted an inquiry into the incident following protests by wildlife lovers and photographers. The investigations pointed out that Prince had died due to natural causes but the face had been brutally chopped off and his canines removed.

The arrested are Soma and Bomma of Cheluvarayanapura, and Panniswamy of Hundipura. Both villages are located on the fringes of Bandipur forest. Three canines were recovered from them. All three were produced before a magistrate’s court and were remanded in judicial custody.

Bandipur Tiger Reserve Director T Heeralal told Express that investigations have concluded and the case has been resolved. However, both forensic and DNA test results are still awaited. He further said, “The culprits are cattle grazers and they committed the crime after they found the animal dead in the deep forests. One of them who had noticed the old tiger’s carcass had sought the help of his friend in removing the tiger’s canines later that evening. The Gundlupet ACF who was heading 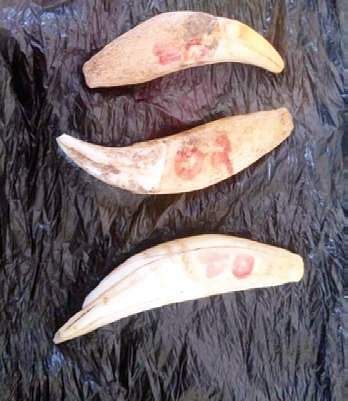 the investigations and had already found many leads, managed to catch them while they were trying to sell the canines. We recovered three canines from the culprits, while the tiger itself had lost one canine.”

Incidents of poaching of tiger and leopard parts after the animal’s death have risen in the state with such cases being reported from Bandipur, Londa, Shivamogga and other places.

Unorganised poachers usually remove animal parts like teeth and nails after the death of the animal. Wildlife activists point out that people can be found freely roaming around forest and tiger habitats. Usually, it is grazers, local villagers, disgruntled lower level forest staff or tribals who may be involved in such cases. In order to monetise the animal’s parts, they crudely chop off or remove nails or teeth.

This is not the first time such a case has been seen in Bandipur, adds the Bandipur Director. “Local people residing on the fringes of the forest are involved in such thefts. Most cases have been incidental where the cattle grazers or villagers have been at the spot of death of an animal and they have resorted to such thefts.”

Now we are on Telegram too. Follow us for updates
TAGS
Prince canine tooth Bandipur Tiger Reserve