BJP state president Yeddyurappa landed in the National Capital on Friday to complain against senior leader K S Eshwarappa, who has raised a banner of revolt against Yeddyurappa.

BENGALURU: The infighting in Karnataka has reached Delhi. The BJP state president B S Yeddyurappa landed in the National Capital on Friday to complain against senior leader K S Eshwarappa, who has raised a banner of revolt against Yeddyurappa. 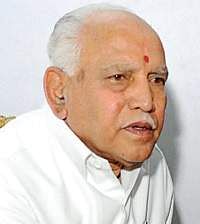 Yeddyurappa, who is carrying the CDs of the ‘Save BJP’ rally organised by Eshwarappa group, is set to present a strong argument to expel Eshwarappa from the party. With this, he also wants to send a strong message to the dissidents.

“I am keen to work unitedly with every one in the party. But, a few leaders have crossed their limits. Their statements have infuriated many legislators. I expect them to mend their ways,” Yeddyurappa said.

Meanwhile, Yeddyurappa is preparing the ground to remove Eshwarappa from the post of Leader of the opposition in the Legislative Council. Party MLC D S Veeraiah, who met Yeddyurappa on Friday, questioned about Eshwarappa continuing in the post after raising a banner of revolt against the state leadership.

The role of National Joint Secretary(Organisation) B L Santosh too is likely to come under the scanner as Yeddyurappa has accused Santosh as the mastermind behind the entire episode.  Conveying his displeasure against Santosh, Yeddyurappa said, “Our National Joint Secretary, who has many responsibilities at the national level, is also found to be involved. I wish he will desist from creating unnecessary confusion.”

Meanwhile, Yeddyurappa has sacked a computer operator in the BJP State Head Office, who is said to be close to Santosh, for drafting the handbills of the rebels’ rally and designing the posters and banners of the rally using the properties at office.

Mysuru: Tension prevailed for some time in the BJP office when supporters of Yeddyurappa and K S Eshwarappa locked horns and raised slogans against each other.

The supporters of Eshwarappa objected to MLC Puttaswamy’s remarks accusing their leader of indulging in anti-party activities. The ripples of the feud between both the senior leaders —Eshwarappa and Yeddyurappa — was felt at the party function held for the induction of JD(S) corporator B M Natraj and RSS leader Giridhar into party fold on Friday.

Supporters of Eshwarappa disrupted Puttaswamy’s speech and demanded an apology from him. Police and local leaders rushed to the spot and brought situation under control as followers of both the leaders started raising pro and against slogans.

Shivamogga: “Eshwarappa should mind his language. His words show his arrogance. He should apologise for the words he used against Yeddyurappa at the dissidence meeting held in Bengaluru on Wednesday,” said BJP leader Ayanur Manjunath. At a press conference here on Friday, Ayanur said Eshwarappa said  ‘navu namma appa ammanige huttidavaru” (we are born to our parents), which he indirectly alluded to Yeddyurappa. Such a derogatory and arrogant statement should not have been uttered,  he said. He challenged Eshwarappa to exhibit his strength by winning the Assembly constituency by fielding his supporters in Shivamogga.

Samyukta Kisan Morcha disassociates itself from violence during tractor parade

Maharashtra should have got more Padma awards: Sanjay Raut

Not '100 per cent satisfied' with Mahavir Chakra awarded to Col Santosh Babu, says his father