Some of the post-graduate courses offered by Bangalore University seem to be no longer attractive.

BENGALURU: Some of the post-graduate courses offered by Bangalore University seem to be no longer attractive.With the admission season for post graduate courses for the academic year 2017-18 concluding recently, the data available with the university shows that some of the PG courses have had admissions in single digits. For example, MA in Sanskrit has received seven admissions, while only five students have got admission in MA French.

In MA Spanish, the admission is just two and in Audiology it is just five.According to the professors from departments concerned, the low admissions is because of the lack of job opportunities. A senior professor from the Sanskrit department said, “Some of the courses have no demand because there are very few job openings in the market. Those who take up the course will either have to work as translators or opt for teaching jobs. To get into teaching, they have to wait till the government recruits them. The university constituted for Sanskrit itself is struggling to attract students.”

Teachers from the Foreign Language department said, “There is always demand for diploma and certificate courses in foreign languages. But, there are very few takers when it comes to PG courses.” However, BU authorities  feel there is no downfall in admissions. “Some courses have single digit admissions because the intake sanctioned itself is few. Considering that, we cannot say the course is not in demand,” said a senior official. BU registrar (administration) Prof B K Ravi said, “The admissions this year are encouraging and to fill up the vacant seats we are calling applications again.” The second notification on admissions will be issued once the university gets information about vacancies in each course.

Of the 199 colleges affiliated to Bangalore University, 56 colleges offering PG courses have had less demand this year. As many as 14 colleges have only one post-graduate student. The total intake in these affiliated colleges is 4,815 seats while only 3,486 have been filled. 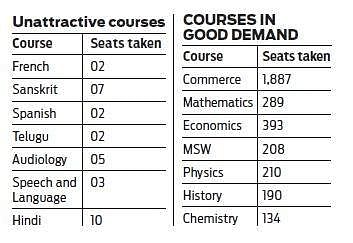 More from Karnataka.
Now we are on Telegram too. Follow us for updates
TAGS
PG courses Bangalore University admissions