BENGALURU: Communal clashes, which have spread across Uttara Kannada district during the week, have become a regular occurrence in Karnataka over the past few years. Since 2011, 120 such incidents have been reported in the State, resulting in the death of 20 people belonging to different communities, including a policeman. National Crime Record Bureau (NCRB) - 2016 reveals that Karnataka is the most communally sensitive State in South India.

Many of the riots, according to reports, occur during the celebration of religious festivals.  Karnataka registered the highest number of communal incidents in South India. The trend was also observed in the previous NCRB data. It shows that there were 42 instances of communal riots with 100 victims in 2016. In comparison, Kerala had 21 and Tamil Nadu had five communal incidents, while no such cases were booked in Andhra Pradesh and Telangana. 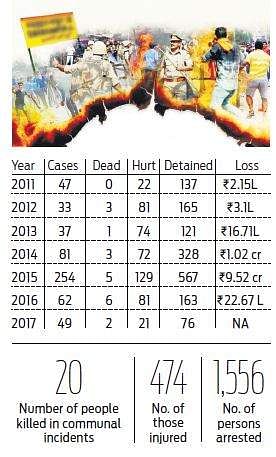 Now we are on Telegram too. Follow us for updates
TAGS
Communal clash Uttara Kannada Karnataka