​This ​village is worth its salt

Despite competition from processed white salt, brown salt produced in Sanikatta village for the last 300 years is in great demand

SANIKATTA (GOKARNA):As you approach this village in Uttara Kannada district, you see a spread of over 500 acres of brown fields. The fields are brown not because of drought but because the most basic ingredient you use in your cooking is drying in the sun: Salt.
Sanikatta village, nestling on the banks of river Aghanashini and on the way to Gokarna, has been producing brown salt, unique to this region, since 1720. For generations, people have preferred using this salt produced in this village.

Earlier, villagers used to produce salt  individually. But in 1952, the salt producers came under the banner of ‘Nagarbail Salt Owners Cooperative Society, Sanikatta’. Till date, the cooperative society has been producing thousands of tonnes of salt every year and selling it at a reasonable price.
Arun Nadakarni, chairman of Nagarbail Salt Owners Cooperative Society, says, “Aghanashini is one of the virgin rivers in the world and it flows through a number of medicinal plants in the Western Ghats range before it joins the Arabian Sea. We produce salt from the same Aghanashini water by natural process; therefore our salt colour is brown.”
The locals spell out the benefits of this salt with pride. Unlike the white salt (iodised) which is widely available in the market, the salt produced at Sanikatta is considered pure and natural. Though there is a natural tendency to go for white salt, the market for Sanikatta salt has not come down in the last 300 years, they say. People who know about the importance of natural salt still do not wish to switch over to other salts that are processed with chemicals. Many ayurveda clinics too advise their patients to use Sanikatta salt.

Sanikatta producers say that only the salt they produce contains natural minerals and herbs which are required for  human body. “Our salt is medicinal. It contains nearly 96 per cent minerals. Every year the demand for brown salt is increasing and now it’s also being used in naturopathy,” said a producer.
This is because leaves, stems, and plants, some of which are medicinal,  that fall into the Aghanashini river during the course of the year get accumulated in the basin and the natural ingredients of these medicinal plants get dissolved in the water.
Farmers, especially organic farmers, take away loose salt in quintals for their crops. “The minerals in the salt will help us to get good yield. We get this salt at a very low price,” said a farmer.
“We produce around 10,000 to 12,000 tonnes of salt per year. There is no question of unsold salt at our unit. But if the demand increases, we will not be able to supply additional salt as there are  only 500 acres,” Nadakarni said. 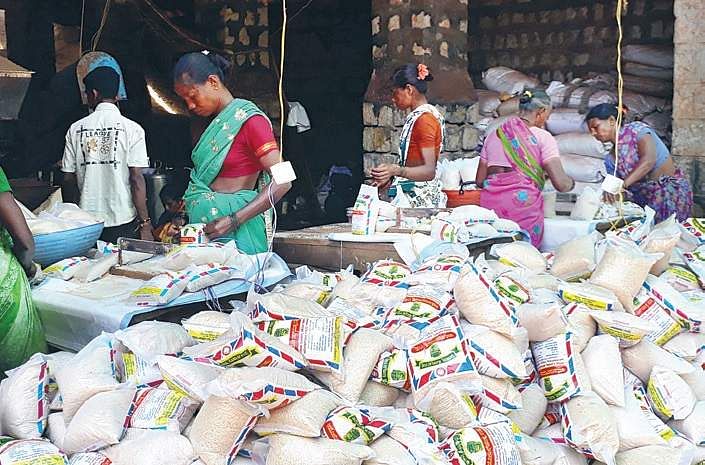 Sanikatta salt is a natural salt extracted from the water that flows into the Aghanashini basin. As soon as the rainy season ends, the water is taken from the basin and stored in a large reservoir for some days where it is allowed to evaporate naturally and increase in density. This process begins sometime in November. When the density reaches 2.5 degrees, the water is let into about 400 acres of salt fields.

When the water content evaporates and the density of salt content reaches 20 degrees, the water is released into condensers spread in 40 acres. The final step is crystallisation, where the density again increases and real crystals are formed and harvested. Then ​t​he iodine is mixed with s​alt as per government guidelines. Salt is then shifted to storehouses. Men and women belonging to the Agera community ensure water flow to the fields, collect the salt, pack it up and transport it to godowns. This is their traditional oc​c​upation. Salt harvesting begins in November and continues till May.

Production in-charge officer, laboratory supervisors, store officer and other officials work along with at least 50 labourers. During the salt production season, around 250 to 300 employees are ​on the job.