Karnataka has maintained its position as the most attractive investment destination in the country for the second consecutive year.

BENGALURU: Karnataka has maintained its position as the most attractive investment destination in the country for the second consecutive year. The state received industrial investment proposals worth Rs 1,47,625 crore in nine months, from January to September 2017. This is more than twice the value of investment proposals garnered by Gujarat (Rs  65,741 crore), the second most popular destination, going by data available with the Department of Industrial Policy and Promotion (DIPP).

According to statistics provided in the DIPP’s latest SIA Index, the country saw Rs 3,32,266 crore worth of investment commitments for the first nine months of this year. Of this, Karnataka has garnered a lion’s share of 44.43 per cent. Gujarat saw Rs 65,741 crore worth investment proposals (19.79 per cent) in the same period followed by Maharashtra at Rs 25,018 crore (7.53 per cent).

While the state tops in the monetary value of proposals, both Gujarat and Maharashtra have received more number of proposals at 321 and 255 respectively. In comparison, Karnataka has received 163 proposals.
Karnataka saw the big investment upturn last year when it received commitments worth Rs 1,54,173 crore (37.55 per cent), a significant jump from its 2015 figure of Rs 31,668 crore. 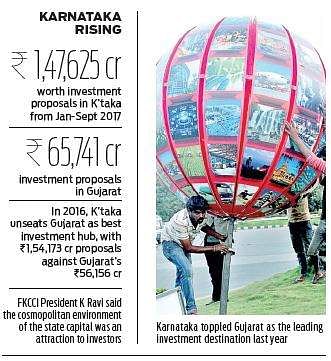 Stay up to date on all the latest Karnataka news with The New Indian Express App. Download now
TAGS
Karnataka invest in Karnataka Karnataka tops with investment proposals