Karnataka has discharged 53 tmc ft of Cauvery water, but Tamil Nadu received 45 tmcft till Sep 23; difference is due to higher seepage after years of drought, say experts.

MYSURU: At a time when the Supreme Court has reserved its final verdict on the Cauvery water issue, the Tamil Nadu government has raised doubts about the quantum of water discharged from KRS and Kabini reservoirs by Karnataka.Tamil Nadu officials observed that the quantity of water discharged into the river and water received in Cauvery in Tamil Nadu show deficit of a few tmc ft of water. They wanted to know whether the state has used the discharged water for irrigation purposes. 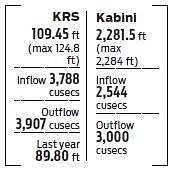 Sources said the Tamil Nadu chief secretary shot off a letter to her Karnataka counterpart and wanted to know details about the water discharged and the water received at Biligundlu gauge and water discharge station maintained by the Central water Commission.Highly placed sources said Karnataka has discharged 53 tmc ft of water, but Tamil Nadu received only 45 tmc ft of water till September 23.Karnataka officials, who confirmed the visit of the Chief Secretary and the Irrigation Secretary to Biligundlu following the complaint of the Tamil Nadu CS, maintained that the deficit is due to seepage as there has been drought for two years and many water bodies had dried up.

Irrigation experts cited a report from the Indian Institute of Science to the state that seepage will be more after consecutive  droughts for many years However, the Karnataka has discharged more than 60 tmc ft of water to Tamil Nadu as against 68 tmc ft of water in a distress year. While TN should get 132 tmc ft of water by this period in a normal year.Top officials in the Irrigation Department felt that water discharged to Tamil Nadu during the current year is more than the water discharge compared to previous year.
“We started discharging water to Tamil Nadu as soon as monsoon set in and inflow increased to reservoirs denying water for irrigation in Cauvery basin,” said a senior official.

The Karnataka government that could not meet Tamil Nadu’s demand for water in previous years when the storage was less,  ensured that water is discharged and even increased to more than 15,000 cusecs a day from each reservoir, following an increase in the inflow after rain in Wayanad and Kodagu in September. Irrigation officials maintained 3,000 cusecs outflow in both the reservoirs.
The authorities pleading anonymity hit out at the riparian state for expressing doubts about the quantum of water discharged and received. They said Tamil Nadu is raising this to make an issue at a time when the apex court has reserved its order.

Farmers in Kabini and Cauvery basin, who did not take up farming as the government refused to give water for paddy or long term crops, accused the state government of protecting the interests of Tamil Nadu farmers’. “When water is flowing to Tamil Nadu, we are made to sit as mute spectators as the government has tied up our hands by not giving water on time and directing us to go only for semi dry crops,” said Mahadeva, farmer from Bilgere in Nanjangud taluk.

Stay up to date on all the latest Karnataka news with The New Indian Express App. Download now
TAGS
rain water water dispute