BENGALURU: Former Deputy SP Anupama Shenoy said she will float a new political party on November 1, coinciding with Kannada Rajyotsava. There were rumours of her joining politics for quite sometime now after she quit as a police officer in June 2016. Her resignation followed a showdown with then minister P T Parameshwara Naik, which led to her transfer from Kudligi sub-division. 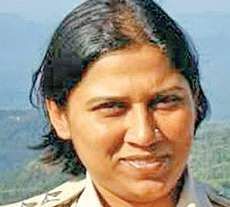 Shenoy announced her decision following a lengthy meeting with some like-minded people at her residence in Udupi. Speaking to Express, she said she was contemplating on entering politics since one year and had also met Delhi chief minister and AAP founder Aravind Kejriwal in this regard. She backed away from joining AAP as she thought that its stance on Hindi may not suit Karnataka.
“Many of my well-wishers suggested me to join BJP, but I found it not much different from Congress or any other existing party,” said Shenoy. The name of her party will be announced during a press conference at Ballari or Kudligi where people had strongly supported her for taking on the liquor mafia and other miscreants.

Asked whether there is space for a new political party in the state, Shenoy said, “I am not launching a party to do politics or for selfish motives. I am waging a war on the present day politicians and I will win it. I will not rest until I send all 224 MLAs home packing. None of them stood behind me when I was shunted out.”

She said her party will field candidates in all seats in the 2018 assembly polls and hoped to see success in at least 60 of them. She did not disclose from where she will contest but confirmed that she too will jump into the electoral fray.  mainly. “The party will be pro-women, pro-environment and will wage a war against corruption, liquor and untouchability,” she said.

Stay up to date on all the latest Karnataka news with The New Indian Express App. Download now
TAGS
Deputy SP Anupama Shenoy