BENGALURU: Political parties in the state are already on election mode and the leaders are working overtime with their backroom boys to weave strategies to outsmart each other. While the ruling Congress is working on plans to trike at the very roots of its main rival BJP’s support base with issues such as Lingayat religion and Kannada pride, State BJP president B  S Yeddyurappa says he is ready with fresh ammo to end the Siddu raj. In an interaction with TNIE, the former Chief Minister dwelt on his strategies to derail Congress’ designs and rip off Siddaramaiah’s image by exposing a string of scams in the coming days. Excerpts from the conversation.

TNIE: How is your poll preparation going?
BSY: Preparations are on and will gain full vigour with the launch of ‘Nava Karnataka Parivartana Yatra’ on November 2.  Apart from our national president Amit Shah, we are expecting Prime  Minister Modi too to participate. It would be held in two parts, one will start from Bengaluru and cover the southern districts, and other from Hubballi and will touch the northern districts. The yatra would span over 75-80 days. We will cover three assembly constituencies in a  day, explaining the failures of the Siddaramaiah government and highlighting the achievements of Modi government at the Centre and  welfare programmes implemented by the previous BJP government in the state.

TNIE: BJP’s fight against Siddaramaiah government seems to be losing steam.
BSY:  Not at all. The agitations will attain their peak at the right time. You  will see that soon. The Parivartana Yatra will be a game-changer as we  hit the road, address rallies in every taluk and district. Our workers  will fan out to every village and reach every house. We will deflate Siddaramaiah’s claims on ‘Anna Bhagya’ as the credit should go to the  Modi government, which is paying a subsidy of `30 per kg of rice being  distributed under the scheme while state is contributing just `3.

TNIE:  Your agitations against corruption in the Siddaramaiah government and  demanding resignation of ministers D K Shivakumar and K J George fizzled  out within no time, why?
BSY:  This government is thick-skinned. They do not care for political  agitations and people’s demands. Practically speaking, they need a  stronger pinch. We will do that in the days to come.

TNIE:  Siddaramaiah is emerging stronger after the party’s victory in the  bypolls. It looks like he has stumped the BJP with issues like  imposition of Hindi and separate Lingayat religion. How do you counter  him?
BSY:  This is just a feeling. But we are ready with our own strategy to expose  his true colours. Our blitzkrieg to expose corruption in the  Siddaramaiah government has started and it will be sustained by exposing  a series of scams involving Siddaramaiah, his family members and  ministerial colleagues. You will see BJP exposing a scam with necessary  documents every three days. There is enough ammunition to destroy  Siddaramaiah’s ‘Mr Clean’ claims. We will also distribute hand bills to  every house explaining the loot by this government, their failed  promises to farmers, failure to utilise central funds and betrayal of  backward classes and dalits. It will become impossible for Siddaramaiah  and his ministers to defend themselves or face the people.

TNIE: Congress is questioning your credibility to talk about corruption as you had to go to jail on corruption charge...
BSY:  Yes, I had to go to jail only because I did not get bail. But have I  been convicted? No. Not even a single charge has been proved against  me. Even Sonia Gandhi and Rahul Gandhi are out on bail. PWD minister H C  Mahadevappa’s son, who is involved in illegal sand business, is out on  bail. Most of the ministers have amassed thousands of crores. It will be  exposed if I-T conducts raids on their premises.

TNIE:  Congress, by reviving the Lingayat religion issue, seems to have  managed to split the community, which has been a strong support base of  the BJP. You seem to be clueless to resist it.
BSY:  We have decided to maintain a silence over the separate  Veerashaiva-Lingayat religion issue. Siddaramaiah is fanning the issue  to divert public attention to cover up his failures. The Lingayat  religion issue will boomerang on him. I do not want to dwell deep, just  wait and watch. As for the Karnataka flag issue that the Chief Minister  has tried to misuse, there is no issue. We all have accepted the state  flag which is in use for a long time. And, calling use of Hindi in a few  Metro signboards as a move to forcibly impose Hindi is gross  exaggeration.

TNIE: The BJP in Karnataka is still beset with infighting and groupism even after Amit Shah’s tough talking.
BSY:  It is true that the party suffered due to differences between me and  senior leader K S Eshwarappa. But that is a closed chapter now. As for  reports about a rift between me and B L Santhosh (BJP national joint  secretary - organisation), it is baseless and non-existent. Someone is  spreading rumours to mislead the people. We are working together like  two brothers. We are interacting with each other almost every day. All  of us are together.

TNIE: BJP seems to be depending too much on Brand Modi and Amit Shah’s strategies win elections in Karnataka .
BSY: Achievements of the Modi government are definitely part of our campaign.  Siddaramaiah  has been accusing the Modi government of discrimination in granting  funds for the state. We will present the true picture. For instance, the  NDA government has released `1,145 crore for disaster relief so far which  is much higher than the `6,67 crore released during the previous UPA  regime. Central grants to Karnataka are set to touch `2.19 lakh crore in 5 years of the Modi regime, against `88,583 crore in the last 5 years of the UPA government.

Apart  from that, we will also highlight the achievements of the previous BJP  government in Karnataka. Besides, we will be holding massive rallies  starting with one for Vishwakarma community. People from backward and  SC/ST communities are being drawn to the party in a big way. They are  all disillusioned by the Siddaramaiah government’s false promises.

TNIE:  Don’t you think the BJP will pay a heavy price in northern Karnataka  due to Modi’s reluctance to intervene to resolve the Mahadayi dispute?
BSY:  The previous UPA government at the Centre deliberately allowed the  dispute to fester. Even now, the Congress will try to keep the dispute  alive. But we are on the job to resolve it amicably through talks with  the Chief Ministers of Goa and Maharashtra. People of Karnataka can hope  for a breakthrough soon. I don’t want to elaborate further.

TNIE:  Amit Shah wanted you to contest from northern Karnataka to shore up  BJP’s fortunes in the region. But, you seem to be reluctant?
BSY:  People of my Shikaripura constituency are not ready to allow me to  contest from elsewhere. I became an MLA and then a Chief Minister with  their love and blessings. They have taken a pledge to ensure my victory  without me campaigning there, so as to enable me to devote my time for  campaigning elsewhere. I have a bond with Shikaripura which is difficult  to break. I will discuss the issue with the national leadership and am  optimistic about convincing them. 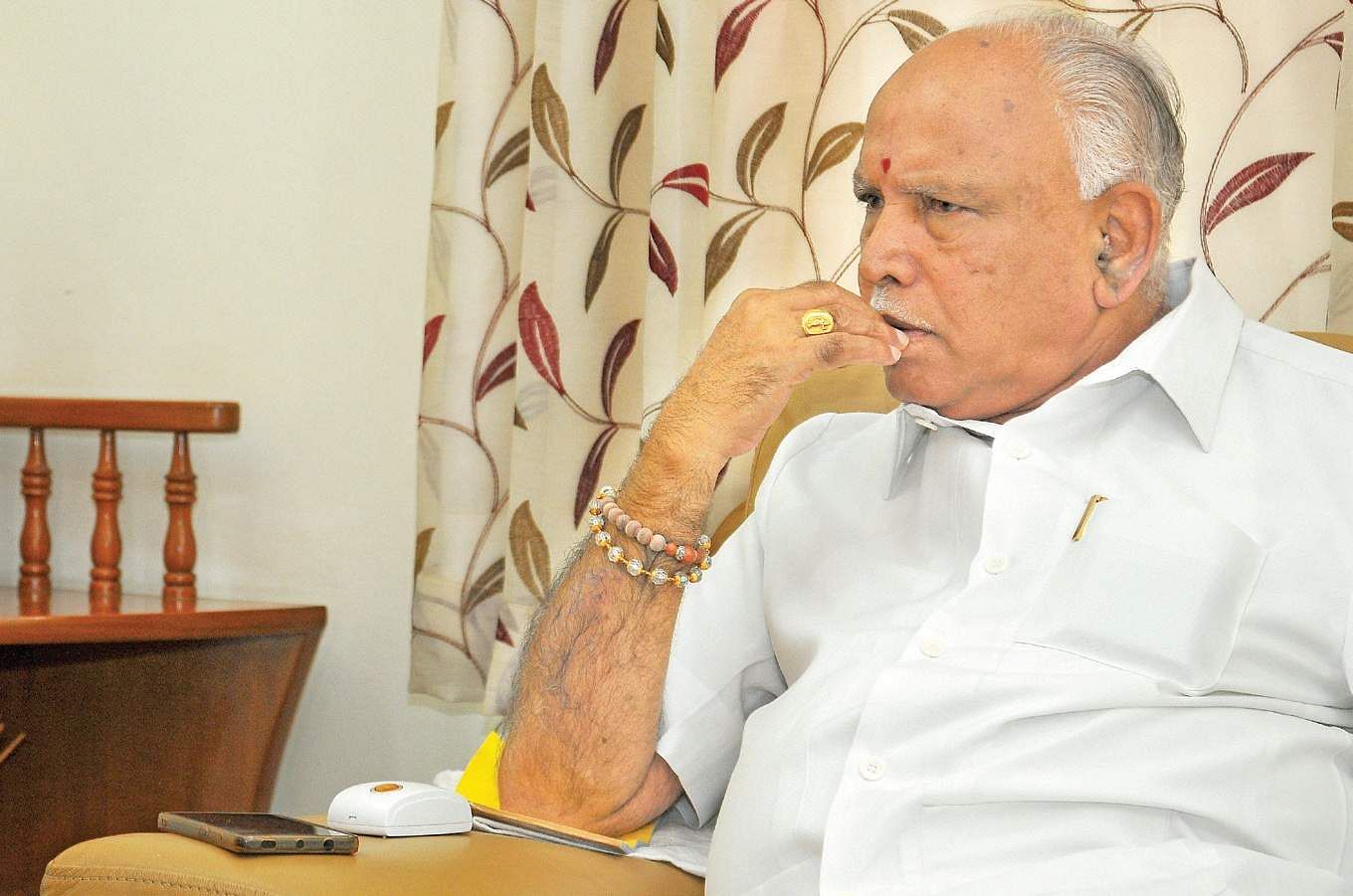 ‘We could have done better for Bengaluru. We will’

TNIE: Then, why is the BJP not fighting for Bengalureans’ cause?
BSY:  The false claims and the loot in the name of developing Bengaluru have been exposed. The sorry state of drains and roads, and deaths of people  due to potholes tell the tale of the big loot that has happened in the  name of taking up infrastructure works. Yes, I accept that we as the  principal opposition party could have done better in taking up the cause  of the people, raising our voice to their plight. I myself will have to  take the lead. I will do that. You will see BJP leaders and workers  hitting the streets of Bengaluru to fight for civic amenities, to fix  the battered roads.

TNIE: What are your plans for Bengaluru if voted to power?
BSY:  First, we will expose the loot perpetrated by this government in the  name of developing Bengaluru. We will come out with concrete plans for  the city in consultation with senior leaders like Ananth Kumar, urban  development experts and officials. Roads need to be concretised and  encroachment of drains should be removed without any delay. We will do  that. We will also use our influence with the Union government to bring  liberal grants to improve the city’s infrastructure.

Stay up to date on all the latest Karnataka news with The New Indian Express App. Download now
TAGS
ligayat religuion