Bengalureans, brace for more rains in next 2 days

As the South-west monsoon withdraws from the country, rains are expected to lash Bengaluru and other parts of Karnataka for the next two days.

BENGALURU: As the South-west monsoon withdraws from the country, rains are expected to lash Bengaluru and other parts of Karnataka for the next two days.According to Indian Meteorological Department, fairly widespread rainfall is forecast for most parts of the State for the next five days. 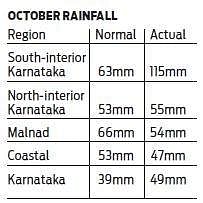 Meanwhile, parts of South Bengaluru might receive heavy showers on Tuesday and Wednesday also. Similar conditions are forecast for the late hours of Wednesday.Speaking to Express, SSM Gavaskar, scientist at Karnataka State Natural Disaster Monitoring Cell said that heavy rainfall is in forecast for the next two days. “During the period when South-west monsoon withdraws, the region generally receives good showers.

Along with that, the presence of a trough off the coast of Odisha and West Bengal is resulting in the formation of rain bearing clouds. We are also observing a cyclonic circulation north of Goa and near central Maharastra,” he said.South-west monsoons have started withdrawing from the sub-continent and is likely to withdraw from the state between October 15 to 18, he said.