BENGALURU: Rain after the drought was a welcome relief for the state this year. However, it also led to tragedies. Lightning strikes have claimed as many as 75 lives till date this year. Maximum deaths in the state have been reported from Mysuru (12), Haveri (7), Dharwad and Kalaburagi (6). 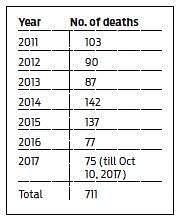 On an average, more than 100 people are dying every year in the state due to lightning strikes since 7 years. As many as 711 people have died in past seven years. Recent deaths of six members in Periyapatna of Mysuru district and Koppal have triggered panic among the villagers. According to National Crime Records Bureau, every year around two thousand people die due to lightning in the country.

The experts say that more number of people die in the villages as they are mostly working in the fields. Also whenever there is rain, they take shelter under the trees. As trees are good conductors of electricity, people who take shelter under them are vulnerable. Even in cities, those taking shelters under trees are vulnerable to lightning strikes.

“People have to take shelter under protected roofs and not trees. Even if they are inside a car, the doors have to be closed,” said Srinivas Reddy, director of Karnataka State Natural Disaster Monitoring Centre (KSNDMC).

An app to alert on lightning

Soon, a mobile application will alert on lightning with the help of censors. The project is expected to be implemented in next three months. “The censors will have the capacity to cover 100 km radius area and they can alert about lightning and thunder at least 40 minutes before,” said Srinivas Reddy.  “Since many farmers are not much familiar with the mobile  applications, we would inform 22 lakh villagers in the state through our helplines, police and Panchayat Development Officers.”

If you are indoors
Prevent using electronic items, including corded phones or computers as electrical wires can conduct lightning
Don’t use your cell phone
Metal pipes can also catch the lightning and it is dangerous to wash hand, shower and wash dishes or do laundry whenever there is lightning
If you are outside
Take shelter in an enclosed building rather than under trees or open garage
Get off bicycles and motorcycles
If you are not able to find a shelter, squat down and put your hands on your knees with head in between to make yourself a smaller target
Do not stay in group and spread out whenever there is chances of lightning or thunderstorm

Stay up to date on all the latest Karnataka news with The New Indian Express App. Download now
TAGS
Rain Lightning Death