Both my grandsons will campaign: Deve Gowda

JD(S) supremo H D Deve Gowda on Friday confirmed that both his grandsons Prajwal, son of H D Revanna and Nikhil Gowda, son of H D Kumaraswamy would be actively campaigning for the party.

HASSAN: JD(S) supremo H D Deve Gowda on Friday confirmed that both his grandsons Prajwal, son of H D Revanna and Nikhil Gowda, son of H D Kumaraswamy would be actively campaigning for the party. Speaking to the media after visiting Hasanamba Devi temple, Deve Gowda said he supported the decision of Nikhil to campaign for the party. “Nikhil is an actor and he has a lot of charisma. If we want to use this for the campaign then what’s wrong with that? He wants to work towards strengthening the party for this father. Why should I say no to that?” he said. 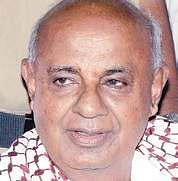 He also said that Prajwal was already in politics and that would continue. However, Deve Gowda refused to commit to where Prajwal would contest from and said, “You said he would contest from Belur and later it was Hunsur. Now you are saying he will contest from Rajarajeshwarinagar. But Prajwal himself hasn’t asked me yet. The final decision is mine,” he declared.

Deve Gowda ruled out an alliance saying he had experienced enough trouble from the other two parties and if they could not form the government, then he would be satisfied sitting in the Opposition.
Speaking about elections in Gujarat and Himachal Pradesh, he said the decision to grant only nine days between filing nominations and voting was a warning to regional parties and would promote unhealthy competition.

Stay up to date on all the latest Karnataka news with The New Indian Express App. Download now
TAGS
Deve Gowda