BENGALURU: Thirty-eight days ​after journalist and activist Gauri​ ​Lankesh​ was shot dead, the Special Investigation Team (SIT) on Saturday released three sketches of two suspected killers​. The SIT also shared video footage of a bike rider wearing a full-masked helmet on a red and​ black coloured ​bike, also suspected to be involved in the crime.​

Former police officers, however, are sceptical about the SIT probe so far. They say releasing sketches over a month after the incident shows little progress in the case. Some even termed it an eyewash, especially after the Home minister’s statement that the case will be cracked soon. 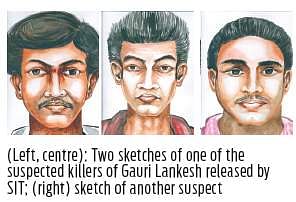 ​SIT chief ​B K Singh, however, said the sketches were compiled after speaking to eyewitnesses, perusing CCTV records and taking the help of a technical team. Two of the sketches were of one person based on different descriptions by the locals​,​ who claimed ​to have seen the suspect around Gauri’s residence. The suspects are aged 25-30 years and stayed in the city for a week to one month before the crime, Singh added at Saturday’s press conference.

“We are not linking them to any organisation now. We are looking at all angles but ruling out professional rivalry,” Singh said.​ The IGP-rank officer, however, failed to explain how they could rule out certain angles when they haven’t got any information about the killers or the motive.
​​The SIT chief said it took an average of two days to finalise each sketch and they sought expert help for this.

The Special Investigation Team (SIT) on Saturday released three sketches of two suspects in Gauri Lankesh murder case. SIT chief ​B K Singh said, “In one sketch, you will find kumkum on the suspect’s forehead. It does not mean he can be linked to any particular organisation. It is possible that eyewitnesses could have added that bit of information,” he added.

The team has also identified the make and model of the bike used by the suspects through CCTV footage but refused to reveal more details. Interestingly, the police also found some eyewitnesses after a `10 lakh award was announced and some of their help was enlisted in framing the sketches. “We chose the information which matched with CCTV footage and was plausible,” Singh added.

When asked how the police could zero in on a face when the suspect was wearing a helmet, Singh said they had found footage where the suspect had raised the visor of the helmet twice, thereby giving a glimpse of the face. So far, they have examined a staggering 75 terrabytes of CCTV footage and questioned over 250 people, he added.