It is a Good and Simple Tax, according to Prime Minister Narendra Modi.

BENGALURU: It is a Good and Simple Tax, according to Prime Minister Narendra Modi. But it is netiher good nor simple, say artisans. The introduction of Goods and Services Tax (GST) on the principle of ‘One tax, One nation’ is affecting lakhs of people earning their living from making handmade goods.

Now, a ‘Civil disobedience movement’ has started in the State against the tax. Gandhian and noted theatre personality Prasanna (67), who is helming it, launched a fast-unto-death in Bengaluru on Saturday. Receiving an overwhelming support from people of different age groups, he was seen interacting with them at the Nidumamidi Math where he launched the protest. 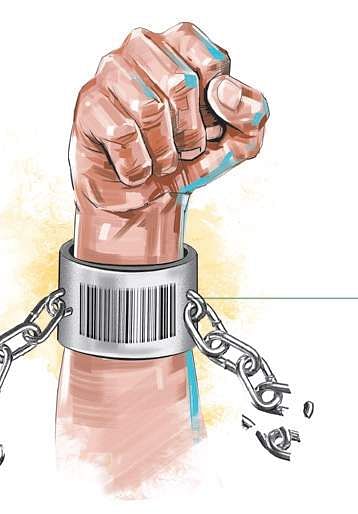 In the background was a banner ‘No Tax Movement - Free products from tax’, the portraits of Mahatma Gandhi and Dr B R Ambedkar. And many handmade products of bamboo, earthen pots, khadi shawls, etc. were on display. Prasanna said the aim of this movement is to take the issues to the people as well as governments. Hinting that the movement will be intensified in the coming days, he said they will protest symbolically by not paying tax on the products.

By refusing to pay tax on handmade goods, the Tax Denial Satyagraha brings into focus the great tradition of civil disobedience as a means of showing dissent. Calling it a ‘second freedom movement’, Prasanna said the earlier movement was for the national flag, which was also handmade and a symbol of independence. Now the second movement is for the very same handmade products. “Bring these products into the gamut of GST with ‘zero tax’. That is our demand,” said Prasanna not blaming the state government or the Centre.

The protest has been on for the past two months and has had some impact. After Prasanna was arrested in Hyderabad where he protested against the GST Council, the same day the GST on Khadi was reduced from 5% and made nil. Eminent personalities like  Jnanpith awardee Girish Karnad, freedom fighter H S Doreswamy and Nidumamidi Math pontiff Sri Veerabhadra Channamalla Swamiji and an NGO Grama Seva Sangha are lending their support to the movement.

After the GST, our lives hang by a thread, say artisans. Will the sector survive the GST regime and continue to sustain the millions dependent on it? Prasanna questioned governments as to why exemption limit on the handmade products is `20 lakh when they are not limiting business tycoons.  “This is like snatching away the enterprise of artisans, not just a job. Instead of limiting the poor, you should provide incentive. Allow them to sell their products like Amul which has provided employment to lakhs of people. So we don’t accept that limit,” he said.

Explaining why the second freedom movement is essential at this stage, Prasanna said imposing GST is nothing but snatching away the livelihood of thousands across the country. For instance, in Karnataka, artisans are from all communities --what you called ‘Ahinda’ (minorities, backward classes and dalits). The state government headed by Chief Minister Siddaramaiah and the opposition leaders should stop their fight with each other for a moment and tell the GST Council to free all handmade products from the tax, he said.

V K Nayana, a young volunteer supporting the movement, said like me the younger generation was demotivated without proper guidance. Now, we are inspired by Prasanna and our direction for the future is very clear. He is taking us towards ‘Grama Swaraj’, she said.

Mentor of the movement R Venkatanathan, former RBI official, said the government has not applied its mind before preparing the GST document for which 7 amendments were made already. The government must encourage rural economy and arrest migration of poor people to urban areas. But, the situation is vice versa. Therefore, this movement is highly relevant at this juncture, he said.

Terming his protest a cultural movement, Prasanna said he will soon direct a musical play, ‘Tayavva’,  on GST and its impact. After his indefinite fast- unto-death, he will begin rehearsal. S Singer M D Pallavi is likely to don the role of Tayavva, the symbol of Mother Nature, all artisans and all unemployed youths. Prasanna played a major role in introducing street plays during the Emergency period. Now, he is using a different form of arts to protest GST.