Notice served to owner last month, but he didn’t pay heed nor did civic agency follow it up

BENGALURU:A day after a building collapsed in Ejipura which claimed the lives of seven people and caused injuries to seven others, Vivek Nagar police have slapped a case against the landlord.
S Gunesh, the building owner, was arrested by police after he went absconding on Monday. He was booked under IPC sections 336 (act of endangering life or personal safety of others), 338 (causing grievous hurt by endangering life or personal safety of others) and 304 (a) (causing death by negligence).
BBMP claimed a notice was sent on September 25 to the owner to have the building vacated. But neither did the owner pay heed not BBMP follow it up. 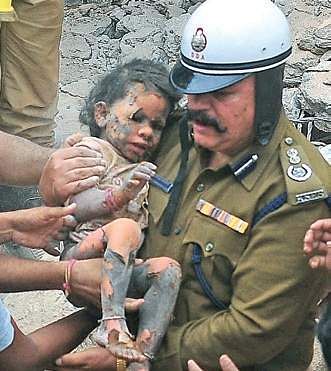 Residents in the area claim the building was built in 1961. The police haven’t booked any BBMP official in this regard as they are yet to know the reason for the building collapse. An investigating official said the State Forensic Science Laboratory (FSL) officials have visited the spot and collected evidence. “Once we get the report, it will be clear whether the building collapsed due to the cylinder blast or not. If it’s not due to the cylinder, we will slap a case against BBMP for negligence,” the police sources added.

However, a BBMP official said, “A notice by assistant executive engineer of Koramangala sub-division was issued to Somesh, father of Gunesh,  on September 25. The notice said they have to vacate the tenants and renovate the building as it seems to be 20-25 years old. Gunesh had received the notice but didn’t take action in this regard.”

On Monday, around 6.40 am, the house collapsed allegedly after an explosion induced by an LPG leak that claimed seven lives. The deceased are Saravana (31), his wife Ashwini (29), who was eight months pregnant, Kalavathi (68), Hariprasad (18), Pawan Kalyan (19), Malashri (25) and Ravichandran (48).  All victims hailed from Tamil Nadu and Andhra Pradesh and had settled here for the past 20 years.

Rescued child in trauma
Three-year-old Sanjana who was rescued from under the debris on Monday has a long recovery ahead of her, said doctors at Victoria Hospital’s Mahabodhi Burns Centre on Tuesday. “She gets startled at night while sleeping,” James Karthik, a family friend says. She has been looked after by Asha and Karthik as the rest of the family is busy with the last rites of Sanjana’s parents. Karthik told Express: “The doctors have told us they can’t say anything conclusive for the next 48 hours. Asha and I are taking turns to look after her.”