The former Chief Minister is set to hit the road again from November 1 after a month’s rest, an ultra-modern ‘Poll Rath’, with all the amenities, is ready to ensure his hectic campaign.

BENGALURU: Recuperating from heart surgery, JD(S) state president HD Kumaraswamy is preparing for an arduous poll battle ahead. As the former Chief Minister is set to hit the road again from November 1 after a month’s rest, an ultra-modern ‘Poll Rath’, with all the amenities, is ready to ensure his hectic campaign does not sap his energy or dent his health.

The custom-built bus is almost a luxurious home-on-wheels with a plush bedroom, toilet-bath room, a mini-kitchen and a small conference cubicle with the centralised air-conditioning. All the amenities have been incorporated keeping in mind the health condition of Kumaraswamy, who is the only star campaigner for the party as party supremo HD Deve Gowda’s age has put limitations on his campaigning.The luxury bus is getting its finishing touches at a private company known for its specialisation in building luxury coaches and caravans on wheels in Karur, Tamil Nadu. “The bus is set to arrive in Bengaluru on Sunday and we will incorporate any changes after Kumaraswamy inspects it,” Syed Altaf, president of JD(S) Minority Wing told Express. 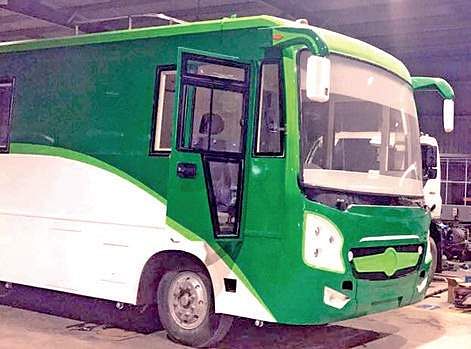 “The luxury coach built on the Ashok Leyland bus chassis has cost about `1 crore. It also has a podium with a hydraulic lift, fitted with modern public address system to enable Kumaraswamy to address public meetings from the bus as he hits the road on a state tour from November 1. He is determined to visit all the districts as the party is determined to get absolute majority on its own strength this time,” said Altaf, who is overseeing the preparations for Kumaraswamy’s campaign.

Sporting the party’s Green and White colour body, the bus with the best air suspension would ensure that the hectic campaign schedules ahead would not drain Kumaraswamy’s energy and affect his health.
This is not the first time Kumaraswamy is hitting the campaign trail in a custom-built vehicle. The former Chief Minister had criss-crossed the state in a specially designed Toyota Commuter luxury van procured by a close associate of Kumaraswamy. According to party sources, the man took it back after the polls.
Altaf is aspiring to contest the next assembly election and is likely to be fielded from Chamarajpet or Jayanagar constituency in Bengaluru.