CM’s 15-day deadline was like a ‘stress target’: urban expert

With Bruhat Bengaluru Mahanagara Palike (BBMP) claiming that it is close to finishing the work of filling up potholes, urban expert V Ravichandar credits the chief minister for setting a tough deadlin

BENGALURU: With Bruhat Bengaluru Mahanagara Palike (BBMP) claiming that it is close to finishing the work of filling up potholes, urban expert V Ravichandar credits the chief minister for setting a tough deadline.He said that even if the target was unrealistic, it would push the BBMP to work on a war-footing.

“When, at the top you say 15 days, there is a good chance things will happen in 30 days. So, from his side, the CM was making sure the system did not take its eyes off the ball. So we should not take the 15 days literally, but more as an indicative sense of the urgency to do this. And now, with the sun coming out, they will be able to take up lasting pothole solutions,” he said.

Ravichandar said he fears about some potholes filled two weeks ago as the weather was not conducive to carry out work. He termed Siddaramaiah’s deadline as a “stress target”, which he said was common in the private sector. “When he gives a message that this has to be done, there’s a better chance that the system will respond to that emergency rather than him rationalising about the work,” Ravichandar said. And hence, Ravichandar says a delay of one to two weeks in filling up the potholes is acceptable.

Summing up, Ravichandar said he would rate the chief minister an 8/10 for his intent and the BBMP a 6/10 for execution, and added that the score of six was a good one given the weather they encountered at the beginning of the 15-day period. 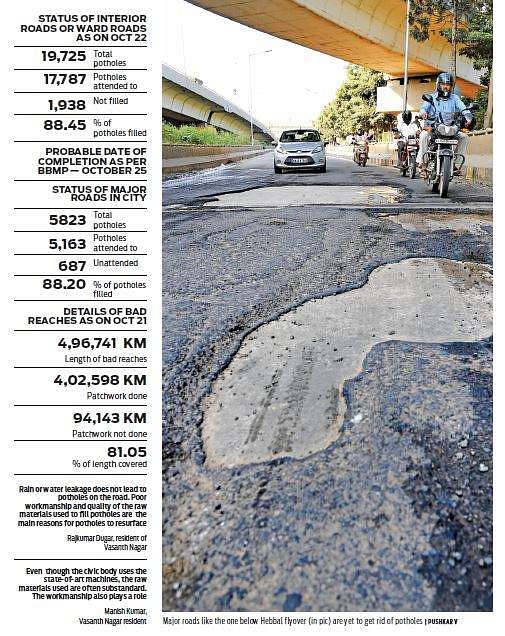