Man with a Monumental Mission

Abdul Aziz scouts for abandoned Jain monuments, documents them and engages with local communities to preserve them. Religion is no bar in his passion for heritage

BELAGAVI: Whenever Abdul Aziz Rajput goes to Jain monuments and elaborates on the purpose of his visit, the Jain munis and monument authorities at first seem quite perplexed. It’s not always that they come across a Muslim with an abiding passion to study ancient Jain  monuments. What’s more, Aziz also involves the local communities in helping preserve the crumbling structures.

For 15 years now, this scholar from Vijayapura has been working on the documentation and preservation of ancient monuments in parts of Karnataka and Maharashtra. He is currently documenting degraded and abandoned Jain monuments in north Karnataka. He will soon be extending his research and restoration to the entire state. He says the decrepit monuments are crying for attention and restoring such heritage pieces could help boost local employment in the tourism sector.

A diploma holder in Electronics engineering, Aziz has been associated with history and archaeology for two decades. He says hundreds of Jain monuments that are in a state of utter neglect can be found in parts of Hyderabad-Karnataka.

“Between 10th and 12th centuries, a number of Jain statues were sculpted in parts of North Karnataka. The kings here encouraged sculptors. As Jainism was adopted by most kings, many Jain forms came up. But over the next few centuries many sculptures were vandalised or ignored by the communities,” explained Aziz. 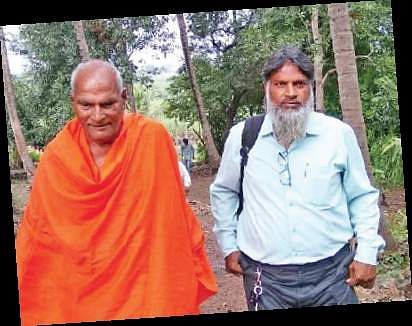 “Among Jains there is a tradition that any sculpture that has developed any kind of defect will not worshipped. Due to this, many inscriptions and statues were left unattended. While few monuments remained close to Jain basadis or temples, others were even worshipped as other gods and goddesses. During my documentation, I explain the importance of these monuments to the villagers so that they can help us in restoring them,” he says.

Over the last four months, Aziz has visited abandoned monuments in villages of Kalaburagi, Vijayapura, Raichur and Belagavi. He has also held discussions with Jain saints and visited old temples where ancient inscriptions are preserved.

“In Chittapura taluk of Kalaburagi district I found an inscription dating back to 11th -12th century that was in a dilapidated condition. The content of the inscription throws light on Vikramaditya VI (of the Western Chalukya dynasty) and his wife Jakkala Devi visiting a sculpture exhibition. It’s great to know how in those times competitions used to be conducted,” Aziz adds. The inscription also mentions about Queen Jakkala Devi purchasing one of the finest sculptures of a Jain Teerthankara and installing it in a new temple or basadi.

“Even today ancient Jain sculptures found in parts of Maharashtra (Solapur and Nasik region) bear Kannada letters in inscriptions. This was the hub of heritage and many sculptors were exported from these parts of Karnataka,” he says.

According to Aziz, after documentation of dilapidated Jain monuments in Karnataka he wants to chalk out a plan to restore them. “I have been seeking help from the local Jain communities and many have come forward. Through social media I am trying to spread awareness on why and how we must restore the monuments which are part of our history and tradition. I have also conducted fund-raising programmes for restoration,” he said.

Ask the historian how people react when he visits Hindu and Jain temples and monuments, he says with a smile, “I leave my religion at home when I go into the field.” “There were times where people were sceptical about my work. But after explaining about my work they became convinced. It’s a wonderful experience to work cutting across social and caste boundaries. Many have made me feel one among them and helped me in my research,” he adds.

While he has received individual support, he feels such work can be sustained only with help from government and bigger organisations. “However, now many Jain saints and pontiffs have ensured that the neglected monuments are kept in one place and secured so that historians can study them,” says a Jain priest from Belagavi.

A polyglot, Abdul Aziz can converse in seven languages, including Arabic and Persian. This helped him study the inscriptions of Bahmani Sultanate and King Adil Shahi of Vijayapura. He also decoded many inscriptions/monuments in and around Vijayapura soon after his studies. Since then he has been associated with history and heritage. He began by documenting old temples in Vijayapura region and found that many Jain monuments were lying unattended. That’s how his attention diverted to this new project.