Five years after being among the first states to implement the Right to Education Act, the Karnataka government has decided to do a review the policy.

BENGALURU: Five years after being among the first states to implement the Right to Education Act (RTE), the Karnataka government has decided to do a review the policy.
Considering a number of issues such as declining admissions at government schools after implementation of RTE, discrimination of RTE students at private schools, the Department of Primary and Secondary Education has decided to have a relook at how the RTE Act is implemented.

Speaking on the issue, Primary and Secondary Education Minister Tanveer Sait said, “RTE is a issue which has to be deliberated. I am preparing a paper for an open discussion on the same.”
“It is true that there is a social obligation and we accept it. But at the same time, we need to think on what cost we fulfill that obligation. Issues like seats being vacant at government schools and discrimination of RTE kids at private schools which have made us to re-think about RTE,” he added.
“The plan is to first fill seats at government schools, aided schools and then private schools in that order. This is what section 12 (1) of the RTE Act specifies,” said Sait. 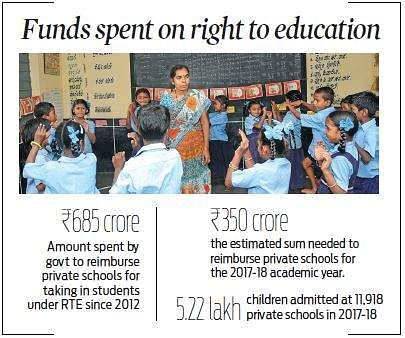 “Some of my cabinet colleagues have expressed displeasure over the declining strength at government and Kannada medium schools as children have migrated to wards private schools,” he added.
He added that there are over 5,000 schools in the state that are dependent on the funds provided by the state government for taking in students under the RTE quota.‘Centre’s cuts affecting quality of education’
Describing the Union government as anti-education, Sait said the Centre was doing politics in the name of education. According to Sait, the Centre has cut funds which were promised for the 2017-18 academic year.“The cuts by the Union government is affecting the quality of education.

Now we are on Telegram too. Follow us for updates
TAGS
RTE policy Karnataka government Right to Education