The Siddaramaiah government, in one stroke, denotified 1,300 acres acquired for the Dr K Shivaram Karanth Layout in March-April 2014.

BENGALURU: The Siddaramaiah government, in one stroke, denotified 1,300 acres acquired for the Dr K Shivaram Karanth Layout in March-April 2014. This is five times more than the land allegedly recommended for denotification by former chief minister B S Yeddyurappa.

Senior counsel C V Nagesh, representing Yeddyurappa, made this submission before the Karnataka High Court on Wednesday. He contended that the Siddaramaiah government issued as many as 200 communications to denotify 1,300 acres. Ten out of these 200 communications were issued in favour of sitting MLA Byrathi Basavaraj, he said. 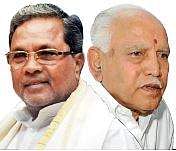 Justice Aravinda Kumar is hearing the petitions filed by Yeddyurappa challenging the two FIRs registered by the Anti Corruption Bureau (ACB) against him in a denotification case.

Yeddyurappa has been accused of denotifying 257 acres of land from a preliminary notification of 3,546 acres, meant for the formation of the Dr K Shivaram Karanth Layout, “bypassing” the Bengaluru Development Authority (BDA), when he was the chief minister.

Yeddyurappa’s counsel contended that the ACB was claiming that the project was abandoned because of the alleged denotification by Yeddyurappa and also accusing him of causing  severe loss to the State’s exchequer for personal gain. “In fact, Yeddyurappa’s recommendation for denotification was not accepted by the BDA,” he claimed.

Rejecting ACB’s claims, he argued that there was a gap of 18 months from the date the present government assumed office on May 13, 2013 and the preliminary notification quashed by the High Court in November 2014 relating to some of the owners of the land.

“During this time, there was no impediment for the Siddaramaiah government to implement the layout project by issuing final notification as 2,800 acres of land was still available, even after 257 acres were allegedly denotified by Yeddyurappa and 446 acres left out by the BDA itself. Instead of going ahead with project, the government issued communications not to include 1,300 acres of land in the final notification,” Nagesh said while showing the documents in support of his claim. The hearing will continue on Thursday.

Now we are on Telegram too. Follow us for updates
TAGS
B S YeddyurappaSiddaramaiahKarnataka High courtDr K Shivaram Karanth Layout