CM Siddaramaiah: I can win from any of the 224 seats in Karnataka

The Chief Minister has already received representations from party leaders in Koppal and Bagalkot, which have a significant presence of Kuruba community, to contest from their districts.

BENGALURU: BJP’s decision to field party state president B S Yeddyurappa from north Karnataka has caused a ripple in Congress with requests pouring in from various district units for Chief Minster Siddaramaiah to contest from a constituency in their district. KPCC vice president V R Sudarshan on Tuesday took the issue to a higher level by writing to party president Sonia Gandhi with a request to field Siddaramaiah from a suitable constituency in Kolar district. 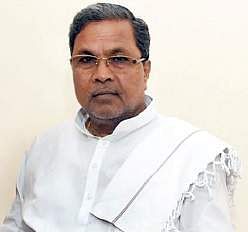 The Chief Minister has already received representations from party leaders in Koppal and Bagalkot, which have a significant presence of Kuruba community, to contest from their districts. Denying any political motives behind the request, Sudarshan said, development in the backward districts of Kolar, Chikkaballapur and Bengaluru Rural would receive a big boost if Siddaramaiah represents a suitable constituency in the undivided Kolar district, which is also close toBengaluru. Reacting to Sudarshan’s request to contest from Kolar district, Siddaramaiah said, “I can win from any of the 224 constituencies in the state.

Yeddyurappa may contest from anywhere, but victory will be ours. But our party high command will decide where I should contest from.” When asked about Sudarshan’s letter, Siddaramaiah said, Yeddyurappa is searching for a suitable constituency as he is giving up Shikaripura seat for his son Raghavendra. BJP’s strategies to win the next assembly election would come a cropper, he added.