Around 2,000 houses damaged partially; 2 gruel centres to provide food and shelter until further arrangements are made.

DAVANGERE: The heavy rains that lashed the Davangere city for nearly four hours with the thunderstorm on Sunday night created havoc and brought much losses to the people residing in low-lying areas in Old Davangere areas. Thousands of houses are damaged because of rains.According to Agriculture Department office sources, the highest rainfall of 103.7mm was recorded in Davangere hobli comprising of Davangere city. 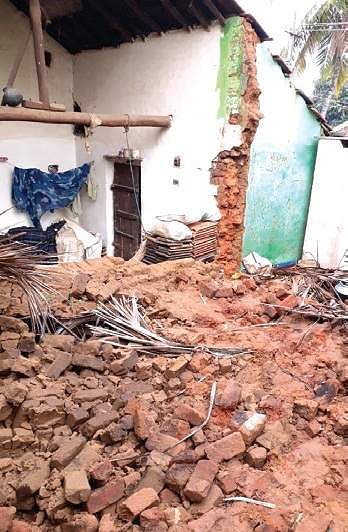 Davangere taluk recorded 86.9 mm rainfall.It started pouring around 7pm on Sunday, accompanied by lighting and thunderstorms. The city had come to a grinding halt by 10.30pm. Knee-deep water at KSRTC bus stand forced the bus drivers to park the buses outside the bus stand till late night. The Fire force office and compound was filled with rain water. The rain water was being removed with help of jet pumps even on Monday afternoon as Express visited the office.

Chikkajajur records maximum 74 mm
Chikkajajur village registered highest rain for the day with 74 mm during the 24 hours that lasted on Monday morning. As per the weather predictions, district can expect some showers during the next 24 hours due to the low pressure formation in Bay of Bengal.

Now we are on Telegram too. Follow us for updates
TAGS
Davangere rainsthunderstrormheavy rain