Minister for Rural Development, Krishna Byregowda, during a review found not only the tax to have not been collected as per the demand but also has not been revised.

BENGALURU: Following low tax collection by gram panchayats, the state government has asked them to mobilise funds on their own, instead of just depending on state grants. Rural Development and Panchayati Raj (RDPR) authorities have even warned of stopping grants if panchayats fail to meet the annual target.

In Karnataka, there are 6,024 GPs across 30 districts of which 22 collected tax as low as 25 per cent. Most of the Panchayats especially from North Karnataka districts including Kalburgi, Bidar, Yadgir, Vijayapura and Gadag, failed to collect tax. "We have noticed that these districts have contributed less than five per cent of the total tax. But on the other hand they are so dependant on state government grants that they seem to take no interest in collecting tax from their village. This system will not work in the long run, GPs should be self sufficient. In our recent review meeting with RDPR Minister Krishna Byregowda raised objection,'' said sources from RDPR.

Minister for Rural Development, Krishna Byregowda, during a review found not only the tax to have not been collected as per the demand but also has not been revised. "It is unfortunate that out of the 6024 GPs, only 1421 have revised taxes,'' he said. He has now directed the Chief Executive Officers (CEOs) to review tax collection every month. He has also directed that the same to be updated in the in-house software. 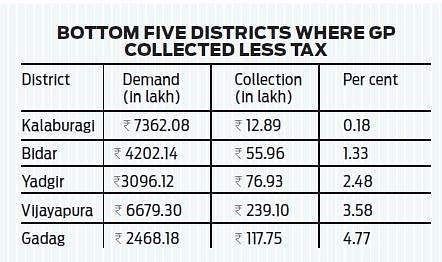 According to a letter written by RDPR Principal Secretary L K Atheeq to all CEOs of GPs, copy of which is  available with TNIE, it is mentioned that under Karnataka Grama Swaraj and Panchayat Raj Act, GPs are empowered to not only levy tax for non-agricultural purpose but also to fix, revise and collect tax. Government wants these GPs to be financially self-sufficient. But it has come to the government's notice that despite the powers given to the GPs, they have failed to collect and revise tax from time to time. GPs have failed to become financially independent. In turn, they are only depending on state government grants. State government is taking this seriously. Atheeq blamed officials concerned for not collecting as per the demand.

When contacted, Atheeq said, "Gram Panchayat taxes have always been a neglected subject. Minister Krishna Byregowda raised this issue in the recent review meeting. If these Panchayats collect more tax, more funds will be generated. The same will be utilised on them, it could be road, street light, toilets or any basic amenities. Ideally, the target should be 100 per cent collection. We have warned them.”

Now we are on Telegram too. Follow us for updates
TAGS
RDPR gram panchayats Karnataka government tax collection