A senior advocate from Hubballi, Mohan Limbikai said the CJI has set a good precedent for family courts.

HUBBALLI: Chief Justice of India Justice Dipak Misra’s visit to Hubballi to inaugurate a newly-built court complex on Sunday will be long remembered. He officiated a Special Lok Adalat on an inaugural day and reunited a couple who had applied for divorce. There was a small celebration with the couple’s four children offering sweets to Justice Dipak Misra after he convinced the husband and wife to stay together and disposed of the divorce petition.

Jagadish Shelagi (41) and Parvati  (38) had married in 2000 and filed a petition seeking divorce before the family court in 2015. The matter came up before the Special Lok Adalat here on Sunday and none other than the CJI was present to hear the matter. 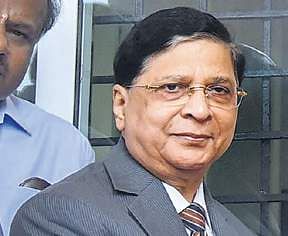 Justice Misra spoke to the children of the couple and he reminded the couple about family values. “He explained to them about the pitfalls of divorce and its impact on their children’s future,” said a court official. “The CJI said that if the institution of family was weakened, it would have an adverse impact on society. He also advised them to give up the idea of separation and lead a good life that would be a model for their children and the future generation,” the official added.

To the surprise of everyone gathered, the couple was convinced by the CJI’s advice and withdrew the petition. The couple agreed to live together with their children and received the sweets offered by Chief Justice Misra. Elated children and relatives thanked the CJI, and the children offered sweets to Misra which he gladly accepted.

Senior advocate from Hubballi, Mohan Limbikai said the CJI has set a good precedent for family courts.
Senior advocate from Hubballi, Mohan Limbikai said, “The petition was pending before the Lok Adalat for over two years. There is little chance of reuniting in such cases. But the Chief Justice who presided over the Adalat successfully convinced the couple. The CJI is known for speedy disposal of cases and has a special interest in Lok Adalats.” In all, Justice Misra heard and disposed of five cases on Sunday.

Now we are on Telegram too. Follow us for updates
TAGS
Dipak Misra Special Lok Adalat