Mangaluru is the most liveable city in Karnataka: Ease of Living Index

The ranking, which was released by the Union Ministry of Housing and Urban Affairs on Monday, places Mangaluru at rank 41 among the 111 cities.

BENGALURU: Mangaluru is the state’s most liveable city according to the new Ease of Living Index, a nationwide ranking of 111 cities based on several parameters related to their liveability. The ranking, which was released by the Union Ministry of Housing and Urban Affairs (MoHUA) on Monday, places Mangaluru at rank 41 among the 111 cities, the highest among all cities from the state which participated in the survey, including Bengaluru which was ranked 58th.

Evaluation of the cities was carried out on a 100-point scale across 14 categories grouped under four pillars based on the institutions and social support that a city has as well as the economic condition and physical infrastructure of the cities. Cities submitted more than 50,000 data points since January this year out of which many of the data points were audited and opinions from 60,000 citizens were incorporated into the results. Cities have been classified on the bases of the population into 4 classes.

Mangaluru scored 10.25 in the Institutional pillar under which governance has been measured. It also scored high (4.13) in the education category of the social pillar 3.47 in the health category under the same pillar. The assessment standards are closely linked to the sustainable development goals of the country and around eight goals are directly linked to the ease of living assessment, the MoHUA has claimed.

After Mangaluru, Belagavi with a rank of 52 is the next top scorer followed by Hubbali-Dharwad at 57, Bengaluru at 58, Shivamogga at 67, Tumakuru at 70 and Davangere at 83. Nationally, Bengaluru is ranked below Greater Mumbai, Chennai, Surat, Ahmedabad and Hyderabad in the top seven cities with over 4 million population and is ahead only of New Delhi in its liveability score. 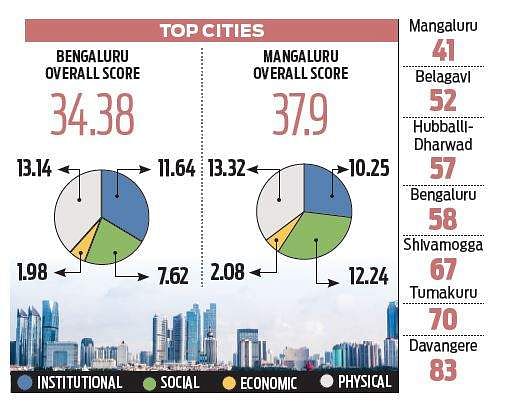 Now we are on Telegram too. Follow us for updates
TAGS
Ease of Living Index Mangaluru