Defence Minister Nirmala Sitharaman, who was in Madikeri on Friday to review the rain damage and rehabilitation work, lost her cool after she was prodded by Kodagu district in-charge minister Sa Ra Ma

MADIKERI:Defence Minister Nirmala Sitharaman, who was in Madikeri on Friday to review the rain damage and rehabilitation work, lost her cool after she was prodded by Kodagu district in-charge minister Sa Ra Mahesh to conclude a meeting with retired defence officials and head to another meeting. “A central minister follows the minister in-charge here. Unbelievable,” she remarked. 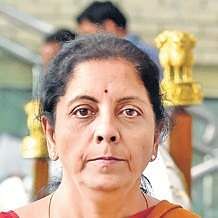 While she was in conversation with ex-army officers including Air Marshal (retd) K C Cariappa, Wing Commander (retd) D D S Kumar, Major (retd) Nanda Nanjappa and others in Deputy Commissioner P I Sreevidya’s chambers, the Kasthurirangan report on Western Ghats was brought up, following which MLA K G Bopaiah objected to the discussion. The discussion was also opposed by MP Prathap Simha, who later apologised to the minister. But what really got her goat was Mahesh pointing out that there were other officials, some of whom involved in relief work, waiting to submit a report. Nirmala was hurriedly led to chair a meeting with officials.

Entering the conference hall filled with media persons and officials, Sitharaman asked the Deputy Commissioner, “Is there a minute-to-minute programme drafted for me?” At which point, Mahesh said the officials in the conference hall were waiting for her. Nirmala replied, “I am following the schedule drafted by you (DC). I do not want to violate that. If officials are important, my parivar (ex-army officers) are equally important. How many of them (officials) are from the field, taking care of the rehabilitation work? I don’t want those whose absence on the field will upset the rehabilitation work to be present here.”

Def Min could have maintained some decorum: Mahesh

Nirmala then replied, “I am following the minute-to-minute schedule drafted by you (DC). I am following the same minute-to-minute schedule, minister (Sa Ra Mahesh). I do not want to violate that. If officials are important, my parivar (ex-army officers) are equally important... How many of them (officials in the conference hall) are from the field taking care of the rehabilitation work? I don’t want one person who is going to be upsetting the rehabilitation work here (in the meeting).”

Mahesh later told media persons that the Union Minister could have maintained some decorum in the presence of military officers and the public and said the entire issue was blown out of proportion when the district was struggling due to the natural calamity. “The people elected to Upper House don’t know the problems of the common people or understand poverty,” he said. “She is not an elected MP, but nominated to Rajya Sabha by Karnataka BJP. She should be more responsible,” he shot back.

He also rued that Nirmala Sitharaman said a central committee will assess the damage before Centre announces a relief package for the district. “The Centre did not conduct any such survey for Kerala before announcing immediate relief. Why is it different for Kodagu?” he asked.

Former CM Siddaramaiah, who was in Hassan, too criticised the Defence Minister for failing to announce grants for Kodagu. He also said that PM Narendra Modi could have visit Madikeri on the lines of Kerala where he announced a special package for the affected families of that state.