The speculated move could enable BJP, with its strength of 104, to form an alternative government.

BENGALURU: The political ripple caused by former Chief Minister Siddaramaiah’s statement of returning as the chief minister again is showing no sign of dying down even after his efforts to play down the episode. Meanwhile, Kumaraswamy put the onus of saving the government on Congress top brass.

Determined to ensure the stability of the H D Kumaraswamy-led JD(S)-Congress government at least till the forthcoming Lok Sabha elections, the Congress high command has swung into action by sending a strong message to its state leaders in this regard. 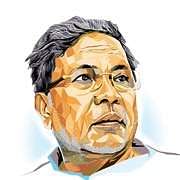 Congress president Rahul Gandhi is said to have assigned the task of keeping the party’s MLAs together and foiling any attempts to destabilise the coalition government to party strongman D K Shivakumar and Deputy Chief Minister G Parameshwara.

Siddaramaiah’s recent statement at a public programme in JD(S) supremo H D Deve Gowda’s political turf Holenarasipur has triggered speculations of a possible “Operation Lotus 2” of about 12 to 14 disgruntled Congress MLAs resigning from their seat to bring down the Kumaraswamy government. The speculated move could enable BJP, with its strength of 104, to form an alternative government.

Not in a mood to take things lightly, Rahul Gandhi is said to have sent a strong message to Siddaramaiah as well to desist from any move that could upset the coalition government. Siddaramaiah was quick in taking the cue and he had to go the extra mile to clear the air.

“My statement of becoming the CM again, which was in response to the demand from the gathering at a public function, has been misconstrued and misinteperted by the media. The crowd wanted me to be the Chief Minister again and I just said I will if the people bless me with the mandate,” Siddaramaiah said.

‘Aware of attempts to destabilise govt’

Clarifying further, Siddaamaiah said, “I was referring to possibilities only after the next election 5 years away. Not now.”However, Kumaraswamy put the onus of saving the government on Congress top brass. “I am aware of the attempts to destabilise the government. I will not worry about retaining my seat. My focus is only on doing some good work for the people,” he said.

However, Congress high command is not in a mood to let its guard down and has instructed Shivakumar and Parameshwara to manage the situation.“Siddaramaiah is our senior leader and a shrewd politician. He will not indulge in any act that would put the coalition government in trouble. It is natural for any politician to have ambitions. Sometimes one will have to issue such statements to boost the morale of the party cadres,” Shivakumar said here on Sunday trying to put an end to the speculations.

Former minister H M Revanna, a close confidant of Siddaramaiah, was emphatic as he dismissed speculations of an impending fall of the Kumaraswamy government as “a joke”.“It is ridiculous to read speculations of this government collapsing within the next 15 days and forming alternative government. Rahul Gandhi has taken a decision to see that this coalition government last its full term of five years. Kumaraswamy will remain the CM for five years. There is absolutely no trouble in the coalition government,” Revanna said.

Municipal Administration Minister and a staunch Siddaramaiah loyalist Ramesh  Jarkiholi met Siddaramaiah in Mysuru on Sunday and held a prolonged discussion which lasted for over two hours. His arrival without police escort added to the curiosity towards the political drama.The entire episode is being seen as part of BJP’s attempts to bring down the coalition government before the forthcoming Lok Sabha polls as it could deliver a big blow to Rahul Gandhi’s attempts to forge a mega alliance with regional parties against Narendra Modi ahead of the Lok Sabha election.

Now we are on Telegram too. Follow us for updates
TAGS
Siddaramaiah Kumaraswamy Rahul Gandhi