While the coordination committee’s sub-committee approved a common minimum programme, the contents are yet to be made public. H D Kumaraswamy has been alleging that conspiracies are at play to topple his government, at a time when the opposition is making predictions with deadlines for his government. After creating flutter with his letters on various issues, former Chief Minister Siddaramaiah’s statements about returning to the top post is doing little to help the government breath easy. 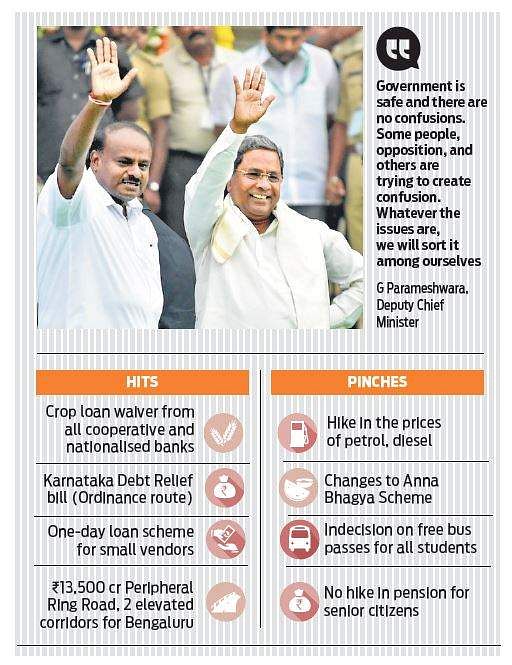 While those in the government continue to assert that the JD(S)-Congress coalition will complete its full five-year term, at the end of 100 days, challenges have only mounted for Kumaraswamy. “Government is safe and there are no confusions. Some people, opposition, and others are trying to create confusion. Whatever the issues, we will sort it among ourselves,” said Deputy Chief Minister G Parameshwara while briefing the press about the government’s 100 days in office. The coalition partners, while claiming that the common minimum programme is ready, are mum about when it would be presented.

While the Chief Minister claims that his government is functioning smoothly, the ‘indiscriminate’ transfer of officials has become an irritant for ministers. “There is utter lack of coordination when officials are transferred. There is no consultation with the department’s minister,” a senior minister in the government told The New Indian Express. The Chief Minister, in an interview, denied the same. He insisted that all transfers - the root cause of discomfort in the government - was done at the behest of ministers.

While floods ravaged seven districts in the state, 16 districts are drought-hit. The Kumaraswamy government, that focused its energies and efforts on the farm loan waiver for the better part of its 100 days in office, is now engaged in the relief and rehabilitation of flood-affected districts with no help coming in from the Centre yet. Siddaramaiah’s upcoming foreign trip is now giving the coalition government jitters. The former Chief Minister will visit Europe with cabinet ministers K J George and R V Deshpande by his side leaving the government guessing. Cabinet expansion, appointment to boards and corporations and finally, the implementation of the massive farm loan waiver are the challenges that lie ahead for the coalition partners.

Despite facing allegations of being anti- North Karnataka, Kumaraswamy believes that the perception about him has changed for the better in the last three months. The opposition, however, continues to accuse the government of failing on all fronts. “There is neither coordination in the government nor mutual trust between partners. No development works are taking place despite this government being in power for 100 days now. People are the ultimate losers,” said BS  Yeddyurappa, state president, BJP.

Now we are on Telegram too. Follow us for updates
TAGS
JD(S)-Congress coalition H D Kumaraswamy