BENGALURU: Prime Minister Narendra Modi’s visit to the city for BJP’s Parivartana Yatra in Bengaluru spawned several hashtags on Sunday. Though various hashtags related to the visit—both pro and anti—trended during the day, #Mahadayi became a major trend soon after Modi’s speech, along with #KarnatakaTrustsModi.

Earlier during the day, social media wings of BJP and Congress had trended several hashtags such as #KarnatakaTrustsModi by BJP and #NammaKarnatakaFirst by Congress. However, due to the volume of tweets generated ahead of the event, Palace Grounds - the venue at which the rally was held - also trended in Bengaluru. 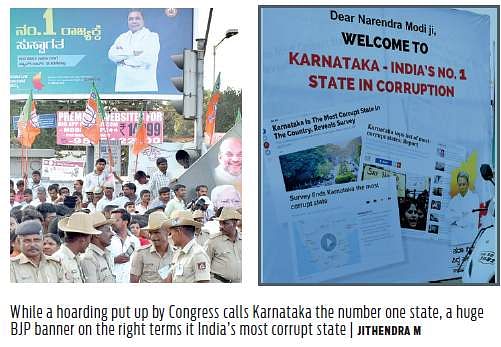 Among the first hashtags related to the mammoth Modi rally that surfaced in social media was #ModiInBengaluru. But, soon #NammaKarnatakaFirst, a hashtag by Congress social media cell started trending with several Congress leaders, including Chief Minister Siddaramaiah, tweeting using the handle.
Siddaramaiah, tweeting from his official handle @siddaramaiah, tagged Modi @narendramodi and sought him to address Mahadayi issue, even before the PM had landed in the city. “@narendramodi-ji , I am glad you are making time to visit the country’s start up & innovation hub, Namma Bengaluru today. On behalf of my people, I urge you to find the time for Karnataka’s drinking water needs & help us resolve the #Mahadayi dispute. #NammaKarnatakaFirst”.

The hashtag war picked up, with BJP state president B S Yeddyurappa (@BSYBJP) quoting the CM’s tweet to condemn the Congress rule in the state. “Thanks for the welcome CM @siddaramaiah avare! Yes. Karnataka indeed has scripted several firsts - No.1 Corrupt State, 3,500+ farmer suicides, collapse of law & order, mysterious deaths of officers, transfers of honest officials, crumbling infra of Bengaluru. #KarnatakaTrustsModi” he wrote. Siddaramaiah, who has not backed down from a debate on Twitter, responded; “Says a man who presided over India’s biggest mining scam during his rule. Only a person totally lacking in #KannadaSwabhimana can call Karnataka, one of the most progressive states in India, No. 1 Corrupt State.”

#Mahadayi
#NammaKarnataka First was dethroned by #KarnatakaTrustsModi as the top trend as soon as Modi began his speech at the rally. However, as expectations of Modi speaking about the controversial Mahadayi dispute withered, #Mahadayi also started trending on social media. The hashtag was soon hijacked by online trolls and political mud-slinging began.

Tweets
#KarnatakaTrustsModi and that’s exactly the reason the BJP, despite being routed from Karnataka by Kannadigas, in 2013 assembly polls, was blessed with 17 seats in the 2014 Loksabha polls. Now, don’t we have the rights to expect Modi’s succour for Mahadayi #ModiInBengaluru
Ramachandra Maharudrappa (@nanuramu)
CM Siddaramaiah seems nervous of Narendra Modi’s Bengaluru visit. He has been actively tweeting (more than most BJP leaders) and has even put up a huge banner at the gate itself welcoming Modi #KarnatakaTrustsModi
- Kiran Kumar S (@KiranKS)
@narendramodi @narendramodi_in @BJP4India one word for #Mahadayi my family vote wud have been for u. This talks about ur attitude towards common ppl. U proved me wrong
- Naren Marol (@NarenDon)