Karnataka figures among the top performers in a nation-wide study on the implementation of the Real Estate Regulation Act across States.

BENGALURU: Karnataka figures among the top performers in a nation-wide study on the implementation of the Real Estate Regulation Act (RERA) across States.A joint report on ‘RERA: How are you gearing up for compliance’ by the Federation of Indian Chamber of Commerce and Industry (FICCI) and Grant Thornton released last week has given Karnataka second place in the country, next only to Maharashtra in terms of registration of projects. Data available up to January 20, 2018, have been taken for consideration in the report. 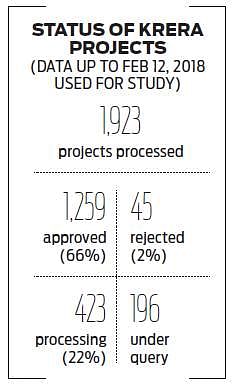 To comply with deadline for completion of projects made mandatory under the Act, 56 per cent felt the need for improving skill sets of staff while 37 per cent felt that project management needs to be outsourced to a third party. To improve customer experience post RERA, 78 per cent have created awareness and trained staff, the report says. Forty one percent of those surveyed also said that major changes have been effected in customer and vendor agreements post RERA. The report though did not specify the exact number of developers interviewed for the study.

In his foreword to the report, Neeraj Sharma, Director, Grant Thornton Advisory Private Limited said, “The survey has pointed out some very interesting perspective on how developers are gearing up for this big change and making appropriate changes to their systems.”

FICCI Chairman Real Estate Committee Navin Raheja said, “The report, a first of its kind, makes a holistic assessment on RERA compliances and how real estate developers are effectively able to embrace this change. Maintaining regulatory compliances with transparency is very important for developers in light of the introduction of RERA.”

Now we are on Telegram too. Follow us for updates
TAGS
Real Estate Regulation Act