Under the programme, various skill-based industries will come up in some districts “on the basis of resources and professional skill available in each area”.

BENGALURU: The huge presence of Chinese products in the Indian market, according to Chief Minister H D Kumaraswamy, has pushed our industries to the verge of closure. In order to tackle the crisis and increase employment opportunities in Karnataka, a ‘Compete with China’ scheme has been introduced.
Under the programme, various skill-based industries will come up in some districts “on the basis of resources and professional skill available in each area”.

With an initial fund of Rs 500 crore for training, the state government will invest Rs 14,000 crore for the scheme over the next five years in nine districts.

The scheme is to promote sunrise industries such as the ones manufacturing electronic components, solar panels and integrated circuits. Various units such as the solar district for production of solar panels in Kalaburagi, integrated circuit board unit in Mysuru and others will come up by tapping into the local resource pool in nine districts. The state plans to generate employment to the tune of Rs 8 lakh through the scheme. 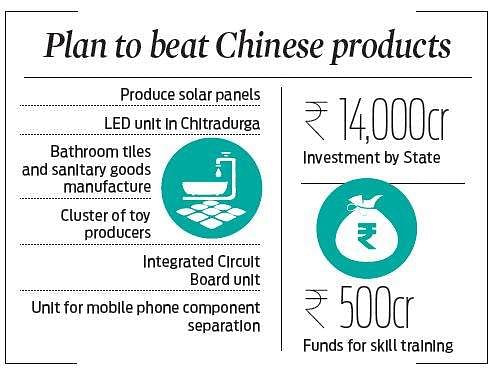 After training the required personnel, the state will also seek the cooperation of private industry. “In the next four years, Rs 2,000 crore in the form of equity share capital will be provided to private institutes participating in the industry who are required to invest Rs 3,000 cr,” the budget stated. This, according to the state, will result in an investment of Rs 5,000 crore in each of the nine districts.

Sudhakar S Shetty, president of Federation of Karnataka Chamber of Commerce and Industry told The New Indian Express that though the concept was good, implementation of the project remains to be seen. “At least 80 per cent of the electronic goods are manufactured in China. If at least a portion of it were to be manufactured here, it will generate a large number of jobs,” he said.

The state government should also provide loans at the rate of interest provided in China. “Interest rates in the country is at 3.3 per cent, while it is 13 per cent for us here,” he added.