The State government has justified the hikes saying that it was the only way to generate more resources after the waiver while insisting that fuel prices remain the lowest in South India.

BENGALURU: How did the State government decide to balance the books, which would have taken a massive beating from the farm loan waiver announced on Thursday? By transferring the burden to all sections of society - especially the middle class.

Considering the raise in tax rates for petrol and diesel, excise duty and electricity charges, people say that the State government has decided to reach into people’s pockets to fulfil promises. They say that the increase in fuel prices will worsen the inflation in the market and affect the electoral prospects of parties in the coalition government in the coming elections.

The State government has justified the hikes saying that it was the only way to generate more resources after the waiver while insisting that fuel prices remain the lowest in South India.

The hike in taxes for petrol from 30 per cent to 32 per cent and diesel from 19 to 21 per cent is the prominent ‘additional resource mobilisation measure’ of the government, along with an increase in excise tax across all 18 slabs. While the hike in fuel tax will be a blow when fuel prices are steadily increasing, people have not taken too kindly to the additional burden of hike in electricity charges. Moreover, excise duty has been raised by four per cent in all of the 18 price slabs. 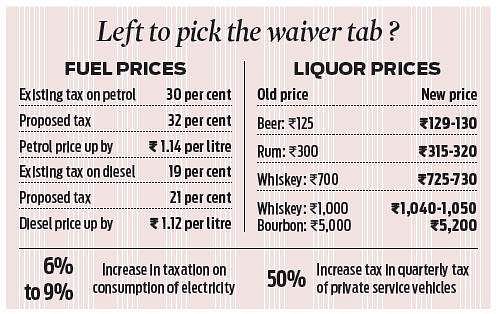 Speaking to Express, Kishore Bogase, a resident of Bengaluru, said that the budget was as if everyone was bent on increasing prices. “The Centre hikes fuel prices and then the State also hikes fuel prices. I feel like we are stuck in the middle, unable to do anything. If JD(S) had thought its manifesto through, we probably wouldn’t have faced this situation,” he said.

Kaneez Fathima, a homemaker in Sarvagnanagar, said that though the intentions of the government appeared good, it was not right to increase fuel prices or taxation on electricity consumption. “They might be helping farmers by writing their loans off. But by increasing prices of fuel, are they not affecting everybody, including the farmers?” she asked.